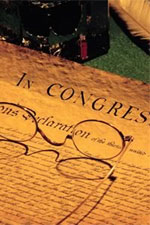 Let me explain what I was referring to in yesterday’s post concerning President Obama’s speech at the Congressional Hispanic Caucus Institute. I referred to Obama’s “warped view of American history,” but kept the post focused on his exclusion of “by our Creator” when quoting the Declaration of Independence. Tip: Mexico declared their independence in 1821.

I’ll admit I’m no American history expert, but during a recent visit to the Alamo and other national landmarks in and around San Antonio, Texas, I read – more likely re-read – that Mexico declared their independence from Spain in 1821. Honestly, I did not recall the year when I was watching the presidents speech, but I did remember their independence was years after our own declaration.

Let me close by saying this. Long before America was even an idea, this land of plenty was home to many peoples. The British and French, the Dutch and Spanish, to Mexicans, to countless Indian tribes. We all shared the same land.

Obama even emphasized the word Mexicans in his speech.  There’s only one problem with that statement: Mexico didn’t exist in 1776, when the Declaration of Independence was written, the earliest recorded moment of America being an idea.  Mexico didn’t exist in 1788, when the US wrote its Constitution, or 1789, when George Washington became our first President.  In fact, Mexico didn’t exist at all until 1821, when the colony that had been known as New Spain declared its own independence.  Before that, the area was populated with … Spaniards and countless Indian tribes.

Now, readers may feel the need to jump into the tit for tat crap about Bush gaffes or maybe even Quayle gaffes, but this is not about a gaffe, a mis-spoken word or mixed-up sentence structure. These statements  were written this way by the president or speech writers for the president.

Update: Jim Hoft at Gateway Pundit picked up on this today, referring to a post over at Ken Pittman’s blog from yesterday.

Where Did The Money Go?

ZoNation: The Fall of America (Video)

We mutually pledge to each other our Lives, our Fortunes and our sacred Honor
5 replies