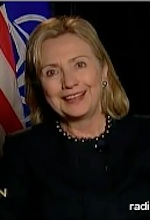 Come on. At least she’s honest. Speaking on Face the State the Secretary of Defense is asked to defend the obviously intrusive pat downs taking place at airports … defend it she did, but not without a little personal note at the end.

The Secretary of State tries to convince Bob Schieffer that the TSA is in a difficult position and we need to be understanding. But even she can see the public outcry is more than a little justified. Don’t you touch her junk, and you know what I am talking about.

UPDATE: OK … with that published I would like to add that I truly believe this administration wants to keep us safe. They are embarrassed with the way the “Fruit of the Boom Bomber” beat security (they shouldn’t, by the way. It wasn’t there watch). They don’t want it to happen again or anything like that on their watch. Thus they grabbed at the latest and greatest technology, intrusive as it is, and installed a intrusive pat down system without considering the public’s sensibilities, without thinking through it clearly and without properly training TSA agents. This is the result.

But they also clearly have no intention of instituting anything even slightly resembling profiling, as in Israel. On State of the Union, TSA Chief John Pistole explains profiling, ain’t happening, even though Israel shows it works.

The result it what we have now. And it’s not good. Even worse, the people are revolting, and the Government doesn’t have a plan B.

Obama administration calls for reduction in regulation on business

The Secretary Of State … decorum please