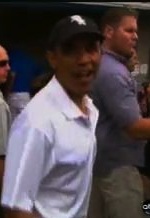 Hey brother, you’re President. Waffles, shrimp, what’s the difference. Sounds like someone got up on the wrong side of the bed.

Reminds me of the line from the movie which I can’t remember right now … Mr Grumpy himself. This via Jake Tapper at ABC news, the young President is asked about the war in Iraq while the family is trying to do its afternoon shopping for shrimp and well … Mr Grumpy shows his ugly head again. The line comes at the very end of the video

Remind you of the waffle scene at all? Via Hot Air.

Elections? What elections? It’s all about … me! Correction: Not so fast.
78 replies

Advance GDP estimate for second quarter revised down from 2.4% to 1.6%
Scroll to top