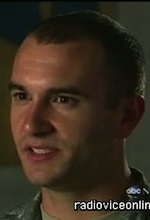 I post this because you need to know. It is a well done piece with actual video of the ambush that took the life of Sergeant Josh Brennan and the courageous action Sergeant Sal Giunta took to save his life. I was stunned. It is, as he says, the kind of courage all in the US military have. He is the first living recipient of the Medal of Honor since Vietnam and it is so only through the grace of God and his military training. Please take the time to watch this excellent report by ABC’s Martha Raditz all the way through. Sgt, Giunta exemplifies the kind of men and women who serve in our armed forces. The kind of people who have served America since this nation was founded.

Imagine watching your best friend being dragged off by the Taliban. Imagine as you watch shots flying everywhere. Try to imagine what would be going through your head. Imagine such courage.

UPDATE: I thought I would take this time to honor another Medal Of honor winner from my hometown, Saugerties, New York. A small town boy who acted with similar courage during Vietnam. Then Captain Roger Donlon was America’s first Medal of Honor recipient in that war. 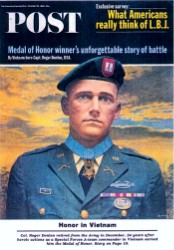 For five hours Captain Donlon moved from position to position, dragging needed supplies and ammo to the defenders of Nam Dong, directing fire, and encouraging his men. Upon entering one of his teams own mortar pits and finding most of the men wounded, he directed their withdrawal to a position 30 meters away and provided cover fire for them. Then, while attempting to drag the severely wounded Pop Alamo from the same position, he was hit again by mortar fire that wounded him in the shoulder and killed his team sergeant. Struggling 30 yards further from the abandoned pit, he found four wounded Nungs lying beside a brick wall. He used a sock as a tourniquet for one, tore his shirt into bandages for the others, then stuffed a remaining scrap into the bleeding hole in his stomach. Before continuing on he propped them against the wall with weapons in their hands, encouraging them to continue the defense. As he moved from position to position, he was hit again…and again…and again. Shrapnel pierced his leg, his face, his entire body. But with determination he battled the fatigue and wounds to continue to lead his men, tend their wounds, direct their fire, and personally defend his “Outpost of Freedom”. When morning dawned the five hour battle had left 55 of the South Vietnamese and Nung defenders of Nam Dong dead, another 65 wounded. Pop Alamo and John Houston were also dead, never to witness the birth of children their pregnant wives were bearing at home. But the defenders at Nam Dong had held through the night, outnumbered at least 3 to 1 by a reinforced battalion of enemy soldiers. Donlon’s team would become one of the most highly decorated units in Army history.

As an aside, when the New York Times came to Saugerties to do a piece on Capt. Donlon, the photographer asked the few kids there to stand near him. I was one of the lucky kids and the picture ended up on the Times front page. I still have the photo.

Rove on O’Donnell: This is a race we cannot win
Scroll to top