President Obama – in my opinion – should have kept his mouth shut concerning the arrest of Professor Henry Gates Jr. up in Boston. By claiming the police acted stupidly (his word) he’s ticked off every police officer in the country. All of that said, I’ve uploaded a copy of the police report if you’re interested.

Granted, the report only tells one side of the story. But with the police report, a history of prior break-in attempts at Gates’ residence, a physically messed up door due to prior break-in attempts, a witness calling the cops reporting exactly what she saw (not disputed), and multiple witnesses on the sidewalk, this is not looking good for the good professor.

Here’s the report, it will only take you a minute or two to read.

Of course, if Obama would have passed on answering the question, we would not be seeing this today. (Click to enlarge) 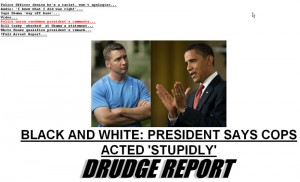 From the AP today, as the White House tries to figure away to re-write history…

The White House tried Thursday to calm a hubbub over President Barack Obama’s comments about a white police officer’s arrest of a black scholar near Boston, saying Obama was not calling the officer “stupid.”

Spokesman Robert Gibbs told reporters that Obama felt that when it was clear that Harvard scholar Louis Gates Jr. was not a burglary suspect last week, “at that point, cooler heads on all sides should have prevailed.”

Seems to me (so far) the cops were more than accommodating and kept their heads cool. Will this be another throw-him-under-the-bus moment for Obama? First Obama blames the cops, now he’s saying “all sides” should have kept cool…

If this story pushes into the weekend, anyone want to bet Obama will move the blame to Gates? Tossed. Under. Bus.

An appeal to Obama supporters
13 replies