Just asking. When you capitalize a period of time like the Age of Discovery, the Industrial Revolution, the Space Age or the Great Depression, you mark it as an historical era. Rachel Beck, writing for the Associated Press, has capitalized her two references to the Great Recession.

Beck’s article goes into the details about all of the great deals you can find during your weekly visits to the supermarket and Tiffany’s. She’s right that there has not been any inflation (none in eight months) during the economic slow-down, but in a historical perspective – let’s go back 200 years here in the United States – should Beck and the AP be referring to our economic times as the Great Recession?

There has never been a better time to be a consumer. America is on sale.

The Great Recession has caused massive job losses and hardship for millions, but it has also fostered a shoppers’ paradise. Anyone who still has the means to spend can find unheard of deals.

So, if you had to identify a Great Recession in the United States during the last 200 years, what period would qualify and why? Spit out some statistics and your suggestions in the comments section.

I’m thinking Misery Index. Since we are currently in a period of deflation – prices dropped almost 1.5 percent in August – I’m not sure how you would properly calculate the Misery Index – hence my two figures in the graphic below. By the way, the Misery Index peaked in June of 1980 at just under 22 percent. 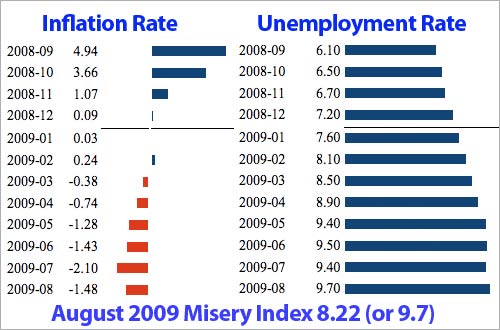 China sells $34 billion in US bonds in December
1 reply