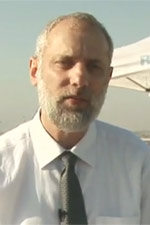 Sure, you can call it a biased report since the video release is from Shraga Simmons at MediaGoliath.com, but why not watch the video and discuss the facts? It will be our featured video for the next few days.

Certainly, the media is being used – in my opinion – to support the narrative that Israel is the aggressor in the Middle East, but since we now have bloggers and independent dispatches from the region published online daily, will the main stream media wake up? Hat tip to Pamela Gellar at Atlas Shrugs.

Last week, I wrote about a Danish report from inside Gaza concerning the living conditions Palestinians deal with every day. It certainly is not ideal, but it’s also not nearly as bad as some in the media portray it to be. Today, Ed Morrissey over at Hot Air reminded me about another report I read a couple of weeks ago and never got the chance to write about.

Tom Gross tells us about the fancy restaurants and an olympic-sized pool in Gaza. (Go to Gross’ site and read the full post please.)

While prominent Western media continue to lead their viewers and readers astray with accounts of a non-existent “mass humanitarian catastrophe” in Gaza, fancy restaurants (video below) and an Olympic-size swimming pool open there 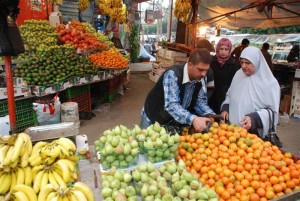 Gaza is about 140 square miles – less than one-tenth the size of Rhode Island – and has a population of around 1.5 million people. Gaza’s population is more dense than Rhode Island’s which has a total population under 1.1 million.

All of the above noted, Rep. Mike Pence (R-Ind.) vocally challenged President Obama on the floor of the House. Why hand out $400 million in cash to Hamas and completely cut off all military support for Israel? Why meet publicly with and offer White House Oval Office photo opportunities with Mahmoud Abbas, president of the Palestinian National Authority, and refuse to do the same with Israeli Prime Minister Benjamin Netanyahu?

Update: Doug Powers over at Malkin’s blog is also writing on the subject.

Gaza has supposedly been handed upwards of $2 billion in aid each year, that’s more than $1,300 per year for every man, women and child in Gaza. Even if the suggested $2 billion figure is too low or too high, where does that money go? How is it used? Is it distributed to the government and upper classes only? Does it trickle down?

Here is the video for the Roots Club – which has a nice Flash website – where it seems the upper and middle classes can hold events and parties – including weddings – in a pleasant atmosphere.

By no means am I saying all or even most Palestinians in Gaza are living the good life. But where is the story from the main stream media about the Olympic-sized swimming pool and complex that opened in Gaza last month? So … a shortage of building materials and water you say? Regional football, volleyball and tennis matches? 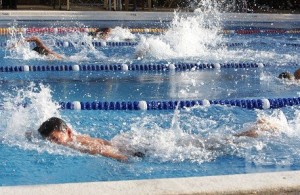 Gaza – Ma’an – Gaza’s first Olympic-standard swimming pool was inaugurated at the As-Sadaka club during a ceremony on Tuesday held by the Islamic Society.

Gaza government ministers, members of the Palestinian Legislative Council, leaders of Islamic and national governing bodies, as well as club members and athletes were among those at the opening ceremony, where Secretary-General of the Islamic Society Nasim Yaseen thanked the donors who helped realize the project.

Yaseen praised the As-Sadaka club for a number of wins in international and regional football, volleyball and table tennis matches.

As-Sadaka athletes performed a number of swimming exercises in the new pool to mark its opening.

Let’s be willing to take in all of the information provided, and yes, let’s be willing to take sides. But to take sides, people need to be provided with good information, and it certainly seems like we have not been provided the full story by the media, as they continue to be used by Hamas and other terrorist organizations as their main weapon against Israel and the west.

Remember Michelle Malkin’s tagline from years back on her blog? It was a quote from Longfellow. The pen became a clarion.

Flotilla of Peace … not so much, says Israel – Video of “peace” weapons

Juan Williams: Israel must not hurt Hamas too bad