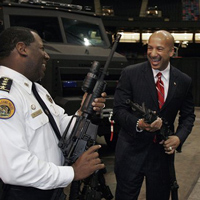 An honest question for the Courant’s editorial staff. If a 25-year-old male was negligent and caused significant injury that put a buddy into the ICU, will it always be labeled “Breaking News” on the Courant’s website? If it involved a circular saw or hammer when a couple of buddies were building a deck of the back of the house, or a 1969 Mustang and a jack-stand in a buddies garage, there is no way it would make the news. I’ll be blunt, the Courant is publishing this story because it involved a firearm.

According to an incident report, the shooting happened just after midnight Sunday at an apartment on Webster Street. Wood was showing Medina the handgun when it accidentally discharged, the report says.

This is for Kelly Glista, they author of the piece published at 8 p.m. on a Sunday night. Guns do not accidentally “go off.” Wood – while pointing the gun at Medina – pulled the trigger of the gun, negligently shooting Medina. That is the story.

What are the Three Conditions when the trigger is fair game?

Back to the story…

Wood has been placed on administrative leave until the investigation is completed, fire officials said. 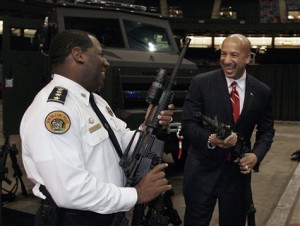 Interesting. If any member of the Hartford Fire Department is negligent – putting anyone, at any time, for any reason into the intensive care unit – will they always be placed on administrative leave until an investigation is completed?

Sidebar: How often does this stupid stuff like this happen after midnight on a Saturday night when there are no other contributing factors?

Sidebar 2: The featured image for this post – shown to the right – pictures former New Orleans Mayor Ray Nagin (D) laughing and pointing a patrol rifle at his then NOPD chief.

Sidebar 3: Are you interested in getting your pistol permit? Do you already have your permit and gun but have not practiced and reviewed safety rules in more than six months? Do you want to improve your marksmanship? Contact me. Proper and safe firearm handling is a perishable skill that must be practiced.

Connecticut should not make pistol permit information available to public