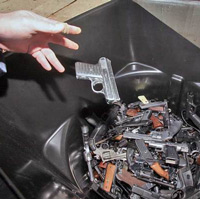 Certainly you’ve heard local police chiefs in many cities touting gun buyback programs as a great way to get guns off the street. Supposedly, that’s what it was all about, but things have changed for many communities including St. Charles, Ill., a town about 45 miles west of Chicago. They are now selling some guns turned in for a profit.

The marketing plan for these gun buyback programs is all about perception … getting those guns off the street so they can do no harm in the future. In almost all of the programs, firearms are turned into law enforcement with no questions asked and you get a small amount of cash or a gift card from one of the big-box stores. Many firearm enthusiasts point out federal firearm licensed (FFL) dealers are more than willing to buy used guns from the public, giving the seller fair-market wholesale value for the gun that may be much more valuable than a $50 gift card to Target. But that’s not what gun buybacks are about. The idea is the guns are to be destroyed, at least that’s the marketing perception.

In St. Charles, someone figured out the town could make some cash on some of the guns, screwing the original owner out of the true value. I guess you could call it a retroactive sin tax since you purchased or possessed the evil item in the first place.

[W]hile some Chicago-area communities host buybacks where weapons are turned in and destroyed, one suburban police department is poised to sell about 20 firearms to two licensed dealers, including some guns seized from criminals.

The choice for a public agency to sell or destroy seized weapons underscores the push in many suburbs to find new ways to generate revenue without raising taxes. The issue also places St. Charles in an unusual position among law enforcement agencies at a time when the gun control debate has been re-energized by the Sandy Hook school shooting and, in Illinois, by the current effort to enact a concealed carry law before a court-imposed June deadline.

“There are individuals who will say, why not simply destroy them?” said St. Charles Mayor Raymond Rogina. “But when that happens, there will be someone saying that’s taxpayer dollars (at stake) and you’re throwing it away.”

That last sentence has my emphasis in bold. So under the guise of “community welfare” the town purchased these guns below market value with the overall perception in the community that they would be destroyed, but they will end up selling some of them for a profit. Honestly, I’m not sure if St. Charles was up-front with “seller” letting them know they would resell the gun if it was worth more to them, but I somehow doubt it. Chances are the town’s police department took that used Glock with a wholesale value of $300 and handed the seller a $50 gift card or cash – that was most likely donated to the cause – with a smile on their face. The gun would be sold to a dealer for $300 and resold back to the public for $400.

The seller was short-changed $250. Every one of them should have been directed to a table next to the cops where local FFL dealers would offer the sellers true market value.

Think I’m being over-dramatic? Note the first paragraph I posted above referenced selling about 20 firearms and then read this…

If the City Council signs off on the sale — the measure is expected to pass when it comes up for a final vote Monday — the Police Department will receive about $6,400 in credit for future equipment purchases.

That’s an average of $320 “profit” on each gun. Assuming sellers received a gift card with a value of $50 to $100 – or cash – they simply stole a couple hundred dollars from each of those sellers.

That said, I want to point out a cool story from right here in Connecticut. One women brought a very valuable gun from World War II into a buyback program in Hartford. Two police officers who are well-versed in firearms and firearm history ensured she did not just get her $100 Wal-Mart gift card, rather they let her know the true value – $20,000 to $25,000 – and helped her out.