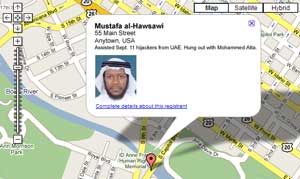 Parody turns real. Thousands and thousands of visitors to our site got a real kick out of my suggestion for a National Terrorist Offender Database that I suggested back in January.

Yup, we’re going to need one of those databases after all. Here’s the WSJ article written by Evan Perez, and a clip…

European justice ministers met with Mr. Holder earlier this week and pressed for details on how many Guantanamo prisoners the U.S. planned to release domestically, as part of any agreement for allies to accept detainees. Mr. Holder said U.S. officials would work to respond to the questions European officials have over U.S. Guantanamo plans.

For “people who can be released there are a variety of options that we have and among them is the possibility is that we would release them into this country,” Mr. Holder said. “That process is ongoing and we’ve not made any determinations or made any requests of anybody at this point.”

Yes, Europe is pushing the Obama administration since they don’t want to take on the burden alone. And remember, the European Union has a problem they are trying to work out internally. From my previous post…

Here’s the problem European Union countries face; they have no internal borders. Unless they have some sort of special rule for released detainees and hold them in some sort of prison atmosphere, released terrorists will be able to freely roam between 22 countries.

So if Portugal will take some, other countries like Austria would have to accept them by default, and they don’t want to do that.

President Barack Obama’s intelligence chief confirmed Thursday that some Guantanamo inmates may be released on US soil and receive assistance to return to society.

“If we are to release them in the United States, we need some sort of assistance for them to start a new life,” said National Intelligence Director Dennis Blair at his first press conference.

“You can’t just put them on the street,” he added. “All that is work in progress.”

That’s right, not only are we going to possibly release some Gitmo detainees into the United States, we’ll end up paying for their education, health care and subsidizing their housing too.

And about that torture stuff…

Next up, Blair – a former Navy admiral – noted the national intelligence team is considering what I have referred to as extreme measures. I also referred to Vince Flynn’s novel (Extreme Measures) when Obama signed the Executive Order to close Camp Delta at some point in the future.

Blair touched on the controversial interrogation techniques used on terror suspects under the administration of president George W. Bush, saying that those methods — including waterboarding, or simulated drowning — would not be used under his tenure.

But Blair, a retired US admiral, added that his team was examining other “enhanced interrogation techniques” for high-value detainees that comply with international conventions on prisoners of war.

He did not elaborate on what methods would be used, but said such interrogations should be carried out by “government employees; they shouldn’t be contractors; they should be highly trained, very supervised.”

But of course waterboarding is totally off the table. Where’s the outrage?

Hat tip to Pam at Atlas Shrugs since she picked up on the WSJ piece last Thursday. I’m not quite sure what the rest of us were doing… oh yeah, we were taking a 36 hour hiatus on posting stuff about AIG and ACORN was planning bus tours…

Update: Gateway Pundit has posted. So has LGF. Will this story gain any traction?

Are Obama’s Czars Accountable to Anyone?
6 replies

To GIVE and to SERVE – It PassesHow Low Will Big Labor Stoop?
Scroll to top