First there was this Newsweek article where we find the Green jobs czar isn’t really sure what a green job is. Then there was the “Republicans a holes” video … now its white kids are mass murderers. And tires to draw the distinction that at least black kids only kill black kids? What’s next, middle America protesters are Nazis, racist, thugs, a mob, and terrorists? Oh wait … that’s the main stream Democrat party. Sorry Mr Jones.

and here’s the link to that crazy Newsweek interview.

Why are we still without an objective definition of a green job?
Well, we still don’t have a unified definition, and that’s not unusual in a democracy. It takes a while for all the states and the federal government to come to some agreement. But the Department of Labor is working on it very diligently. Fundamentally, it’s getting there, but we haven’t crossed the finish line yet.

Now we get from Hot Air, Jones is a big supporter of convicted cop killer Mumia Abdul Jamal, which fits with his crazy Communist, 9-11 Truther, tin foil hat background. If you are not familiar with the Jamal story, he was convicted of killing a cop on the streets of Philly in the 80’s and since then the reports of conspiracy and a “second gunman” have been the rage of conspiracy theorists of which apparently Jones is one.

So here’s the tally on the White House Czar:

Communist? Check. Truther, check. White kid slamming nut job? Checkity, check, check, as Michelle Malkin would say. She has the most comprehensive background on Van Jones. And he has his job today because … ? 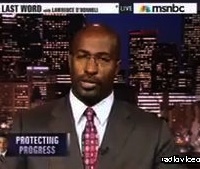 Obama won’t lose black vote “no matter what he does”

Three Cheers For “The Sewer”

Will there be a Congressional review of Obama administration czars?
4 replies