The grandfather was trying to get away and keep his grandson safe when he saw the thug pull out his gun. The thug fired, and when grandpa saw the opportunity, he returned fire with his own gun and the thugs ran away … only to carjack someone else who did not have a gun.

First, I want to point out no matter what you hear from the regulate-the-guns crowd, firearms are used by people every single day, multiple times a day to stop a crime. Most of the time, no shots are fired. AWR Hawkins over at Brietbart, along with many other authors, bring these stories to us on a regular basis. They rarely – if ever – will make the national media rounds.

Let me also point out this attack happened outside the home. Mr. Tookes tried to get away. His escape was blocked by these thugs and the thugs started shooting. One of the stated goals of the anti-gun crowd is to limit carry outside the home. They emotionally feel bringing guns outside and carrying them is a bad thing. They think this action somehow escalates bad situations making them worse. By extension, we must accept that if they had their way, Mr. Tookes and his grandson could very-well be dead.

Here are the mug shots. I’m not going to bother spending the time to look up their criminal history, but I’ll willing to bet – based on their actions this day – a required background check would not keep these guys from getting their guns or ammunition. They are criminals and – by definition – they don’t care about the law. 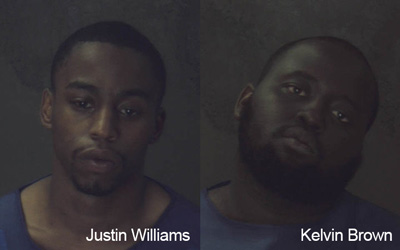 From WSB-TV in Atlanta.

[Luther] Tookes was bringing his grandson home from school when they noticed this strange car. “Black guy started walking toward the car. It didn’t look right. I told my grandson to get down,” Tookes said. “Soon as I seen him pull out the gun, I put it in reverse and rammed their car.” Both Tookes’ and the suspects’ vehicles were damaged by the gunfire. “They shot at me as I was backing out, five and six times. Lucky it missed me and my grandson,” Tookes said. He then saw his chance to get his own gun. “I pulled into the grass back there and then pulled my gun and fired a couple times,” Tookes said.

The thugs – Justin Williams and Kelvin Brown – ran from the scene towards a shopping center where they carjacked someone else and were eventually captured by police after a chase.

Not in the Media: Roderick Scott found not guilty of manslaughter 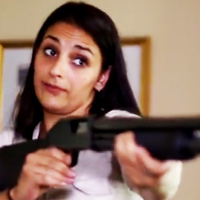