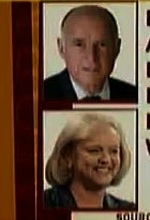 The conversation is amazing. Supposedly Brown is talking with an aide about cutting a deal on law enforcement pensions in California.

In an audio recording available on the L.A. Times blog PolitiCal, Brown can be heard leaving a voice message for Scott Rate, a union official for the Los Angeles Police Protective League.

After asking Rate for the league’s endorsement, Brown says ‘thanks’ and hangs up the phone, but the call doesn’t end.

Instead, the message continues to record and Brown can be heard talking about the situation with his aides.

After Brown discusses his frustration with Whitman potentially cutting a deal for several seconds, another voice appears to interject saying, “What about saying that she’s a whore?”

“Well I’m going to use that,” Brown replies. “It proves you’ve cut a secret deal to protect the pensions.”

The tape was released to the paper by the Los Angeles police union, the newspaper reported.

For your morning listening pleasure, from “The Morning Joe”.

My only question is the same as Joe Scarborough on the Morning Joe … was it an aide … or was it Brown? (UPDATE: Video added)

I find the conversation so hard to believe. Come on you folks. I mean the left venerates women, champions their causes, holds them such high regard. The Dems are the party of women right  Christine O’Donnell, Sarah Palin, Niki Haley, et al?

The other (baby) shoe drops…

California balances budget with your money

Teachers on both coasts paid to do nothing

Some on the left are finally getting it
13 replies

Obama to lefty college students: Let’s win this one for … me!
Scroll to top