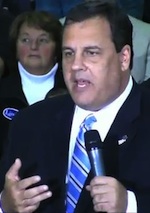 … if you let this opportunity slip away. Chris Christie paid a visit to Connecticut to campaign and endorse Linda McMahon and the most telling moment came in the first video below, toward the end of the speech. “You need to stand up and fight.”

Three Chris Christie moments but first a comment. It’s not insignificant that Chris Christie came to Connecticut to endorse Linda McMahon. It tells you three things. First, this race is closer then the MSM or public polls would have you believe. Two, it tells you he think enough of McMahon’s conservative credentials that he would stand on a stage and repeatedly praise her. And it tells you that the man who turned a very blue New Jersey red believes the same thing can happen here … with a straight head on conservative message. Enjoy.

One more bite for your viewing and/or listening pleasure. A warning. Don’t be fooled by the MSM. The races are only getting tighter for Democrats who were once considered safe … like Connecticut. And they are desperate.

OK, OK, one more. Christie on Blumenthal’s jobs blunder. I guess he couldn’t resist. Who could?

It’s not just about McMahon though. It’s about using this opportunity to send the leftists and state-ists packing. This is it. Don’t back down. Send every tax and spend, big government state-ist home. Take out the trash, and there will be no recyclables.

United Against The Porkapalooza … for what its worth.

See You in November … the musical

“Shoveling Lies” and why you need to throw them out.
Scroll to top