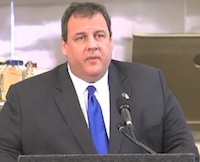 The epic failure on the part of, mostly Democrats, to cut spending and thus cut the deficit has shown just how politics trumps our economic vitality and liberty. It is a fact not lost on NJ Governor Christie who took the opportunity to take a whack at Obama for voting present on this issue. Video below the fold:

The specific reference is to the super committee failure to cut $1 trillion dollars from the budget over 10 years mind you because Republicans would not give in on raising taxes … more on that in a bit. And Democrats insisted on cash … and of course would not touch entitlements … the result no deal, no cuts.

But had the President stepped in, perhaps a deal? We’ll never know, but Christie knows one thing, Obama’s no leader … more like a Senator. Watch and enjoy, mobsters.

Thanks to Hot Air for finding the video.

As for raising taxes to cut the deficit? Well I’ll let Grover Norquist explain … give them more money … the Dems will just spend it.