Just yesterday I received an e-mail from a friend who was quite upset about his tax burden. He increased his quarterly payments by 33 percent in 2007, but his tax bill was higher than expected and he still owed more money. He owed so much more that a penalty was added.

He was under the impression that taxes had increased in 2007. But fortunately for him, the federal tax rate from 2006 to 2007 was not increased, he just learned an important lesson – those who are successful and earn more, pay more. Liberals demand that “the rich” pay; and they do.

In 2001, The Economic Growth and Tax Relief Reconciliation Act of 2001 became law. It lowered the tax rate over time, reduced the capital gains tax, changed rules concerning the estate (death) tax, made some retirement planning tools a bit simpler and – big drum roll – are set to sunset on Jan. 1, 2011.

Here’s the basics of the tax cut, grabbed from Wikipedia:

The Jobs and Growth Tax Relief Reconciliation Act of 2003 accelerated the changes listed above and lowered further taxes on dividends and capital gains.

Note that tax brackets do change from year to year. The government assumes that your income will rise at about the inflation rate and adjusts brackets accordingly. Nice of them, but the marginal rates have not changed since the passage of the 2001 law. 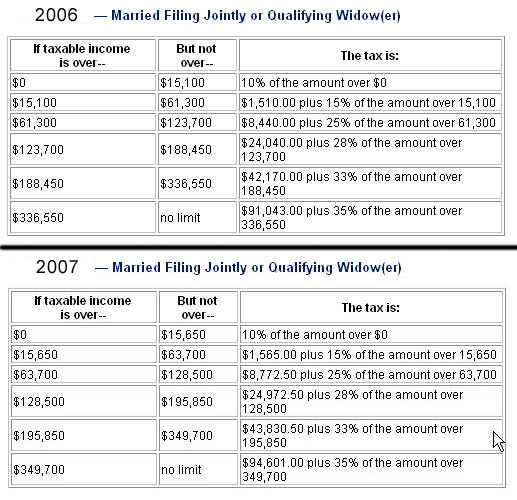 So if the tax rates stayed the same, how come people are paying more in taxes? It’s simple, the economy grew, more people were working, and take-home income increased.

Let’s say that in 2006 a family made $160,000 in taxable income (defined as adjusted gross income minus the standard deduction (or the itemized deduction) minus the deduction for personal exemptions). The federal tax bill would be just under $34,000.

What happens when the liberals get their wish and the 2001 tax cuts are left to expire? Will revenues increase again or will the tax burden increase to the tipping point where people stop investing and the economy slows even further?

Pelosi: Wouldn’t meet with Vets for Freedom. Another Millionaire’s Tax – Don’t They Get It?
Scroll to top