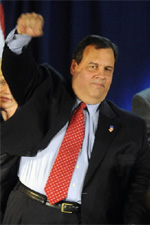 Unfortunately, it’s not completely clear what Ed Buck – activist and former European-traveling model – is yelling about. I think he mentioned somebody lying about Jerry Brown, but Ace mentions something about Meg Whitman – running for governor in California as a Republican – looking like Arnold Schwarzenegger in a dress. You can’t make this stuff up.

Gov. Chris Christie (R-N.J.) stepped in since he did not like Buck yelling at Whitman. I don’t think he was successful in completely shutting the guy down, but the otherwise friendly crowd certainly whooped and hollered after the exchange. Although the video does not show it, it looks like Buck may have been escorted out.

In an online article concerning Buck’s candidacy in 2007 for city council in West Hollywood, we learn he fosters rescued dogs before adoption. That’s nice of him, and I bring it up since … well … I’m not sure.

Others writing include AP at Hot Air who ads a good video with a story told by Christie at the event. Ensure you head over to Real Clear Politics who has a full news report with a bit more information about the Whitman rally and verbal tussle.

UPDATE (Jim): I’ll take one of these please!

Krauthammer on Obama vs Ahmadinejad: adolescent
Scroll to top