Knee-jerk reaction from the anti-Second Amendment crowd. Rep. Peter King (R-N.Y.) will introduce legislation to create a gun-free zone encompassing one-tenth of a mile around federal officeholders and judges as they move from place to place. If you are carrying a firearm, you won’t be able to get within 1000′ of these federal employees.

From the Daily Caller with a hat tip to Ed Morrissey at Hot Air.

Rep. Peter King, a Republican from New York, is planning to introduce legislation that would make it illegal to bring a gun within 1,000 feet of a government official, according to a person familiar with the congressman’s intentions.

King is chairman of the House Homeland Security Committee. The proposed law follows the Saturday shooting of Rep. Gabrielle Giffords (D-Ariz.) and a federal judge that left six dead, including the judge, and 14 wounded. 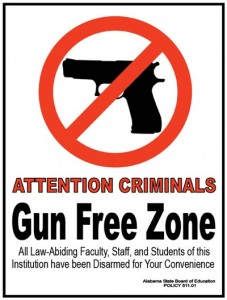 Not a bad idea, so why not just create gun free zones around all residents in the United States? For those of you who think that idea to be absurd, why are you suggesting these federal employees get special treatment? Are they more important than you or me?

This legislation would of course be completely worthless, since we all know that gun free zones don’t work. If you are a criminal or intend to commit a criminal act, no law will stop you.

Do the congress-critters and pundits understand that concept at all? Really, we need to ask the question. Do they really think they can just create a law – without of course creating a police state – and somehow cure the evil within criminals? Are they nuts themselves?

By the way … there are already quite a few laws on the books, including one that makes it a federal crime to murder or attempt to assassinate a federal employee. But Rep. King and many others think more laws will solve the problem.

“From a conservative perspective, we have to have a stable society, we have to keep crime down,” King said. “You cannot do that if the police cannot be assured that illegal guns are not on the street.”

“To have a stable society and a safe society, we have to remove illegal guns,” he continued.

Illegal guns? Ahh yes … the jump from keeping guns 1,000 feet away from congress-critters to keeping “illegal guns” – whatever they are – off the street. That makes all sorts of sense.

If they could only come up with the right law …