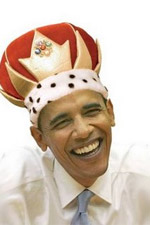 This was one of the Obama administration’s attacks on the firearm industry bypassing the normal legislative process. In-other-words, President Obama used his phone and pen to tell the Federal Insurance Deposit Corporation (FDIC) to put firearm dealers on a list of “high risk” businesses banks should avoid. Banking is heavily regulated by the federal government, and if banks wanted to stay “in good graces” with the feds, they were told they should “avoid those high risk businesses” or … well, you may have problems in the future.

So Obama put a virtual gun to the head of banks, and the banks responded. From The Washington Times, with my emphasis.

Meanwhile, the Justice Department has launched Operation Choke Point, a credit card fraud probe focusing on banks and payment processors. The threat of enforcement has prompted some banks to cut ties with online gun retailers, even if those companies have valid licenses and good credit histories.

Many firearm dealers across the country had their accounts canceled and were provided only days to find other banking partners.

In 2012, Bank of America suddenly dropped the 12-year account of McMillan Group International, a gun manufacturer in Phoenix, even though the company had a good credit history, the owner said. Gun parts maker American Spirit Arms in Scottsdale, Arizona, received similar treatment by Bank of America, the country’s largest banking institution. …

After McMillan Group owner Kelly McMillan publicized Bank of America’s action on his Facebook account, he found that thousands of small gun-shop owners across the country were in the same situation. Banks were either dropping them, freezing their accounts or refusing to process their online sales, so he opened a credit card processing company for the gun industry called McMillan Merchant Solutions.

That’s an example of a pen and phone in the hands of a tyrant.

Thankfully, firearm dealers are now off the list. An update from The Washington Times today.

Gun retailers are no longer on a hit list deemed “high risk” by the Federal Deposit Insurance Corp. after the banking regulator formally withdrew Monday the list it put together that outlined what merchants may be considered risky for banks to do business with as part of the Obama administration’s “Operation Choke Point.”
The agency said its explanatory warning list “led to misunderstandings” about how it’s supervising banks’ ties to third-party payment providers, according to Bloomberg News.

The regulator said it never meant to prevent banks from doing financial transactions with the types of businesses on the list.

What a load of bull crap. This is exactly what the Obama administration wanted to do. They wanted to send a message making it clear they are the tyrants in charge and with a phone call and a pen, they can make the lives of legitimate business people across the country a nightmare. A pure power play, and as a bonus they made the anti-gun groups smile.

Feinstein, $25 billion, and her husband’s company