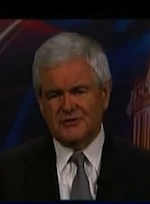 Well this is one where I disagree with Gingrich. In the sound bite that follows you will hear Sean Hannity ask Newt Gingrich if there is some kind of plot here. Gingrich says absolutely not. I agree with that, but not the full answer. In fact I find the President amazingly focused.First the sound, Newt Gingrich says Obama has handled this crisis worse than any previous President has handled a crisis. He contends the answer is simpler.

But is he really. In just a year and a half the President has managed to take control of at least one of the world’s largest banks, two automobile companies, the beginning of control over the health care industry through HHS, and now, because of this crisis, is in the position of controlling an oil company simply by nudging it into bankruptcy. Next up on the agenda, amnesty. He has ignored the Arizona Governor’s plea for help along the border, despite a public promise to do so … even as crime has risen. Chaos. We need to solve this with amnesty, he will cry.

Incompetent? I don’t think so. I consider him amazingly focused.

George Will: Just who is the snake oil salesman anyway?

It was staged … Part two
6 replies