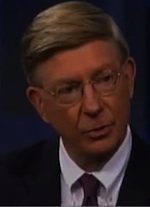 Why does it seem that whenever these Democrats accuse the Republicans of being dishonest and underhanded, it always seems to best describe themselves. Take Obama calling the Republicans snake oil salesmen for pushing a plan of tax cuts and spending cuts to revive the economy. It’s just another take on his “same old, same old campaign”. But Will always has a great way of seeing through the fog … with facts. Jake Tapper asks Will to respond to Obama’s assertion and whether it will work on the campaign trail. Will responds as only Will, and of course Krauthammer, can.

Let’s take a look at the facts. Unemployment when Obama came into office was 7.6%, it’s now 9.5%. Since Obama’s stimulus went into affect America has lost another 3 million jobs. The deficit, in George Bush’s last full budget year was $460 billion dollars. Obama has tripled that.

And yet this crowd wants to do more of the same? No thanks.

Does that make yesterday the “Sermon on the Mount?”

Vote Democrat: It could have been worse

CNN: Pay no attention to the embargoed info on the screen.
12 replies

Axelrod: Yup, it’s kinda too bad those oil rigs are leaving the gulf

Gibbs: On second thought, yeah, we could lose the House
Scroll to top