This is really the third in a series of posts but in many ways I think is the most important. Make sure you read Unemployment estimates with and without recovery plan and The Coming economic meltdown.

In part one, Steve points out that the Democrat stimulus plan has done little to stimulate job growth. In fact, as he demonstrates, unemployment has already reached the Obama administration’s worst case scenario, even with the Democrats wild spending … as we noted here. 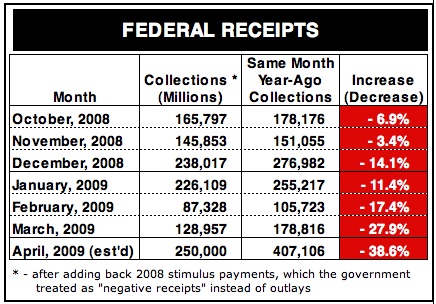 The is one remaining piece to this terrifying economy puzzle and that is government revenue. The folks at Maenianum Secundum and BizzyBlog have done an amazing job of detailing the decline in Federal revenue over the past 6 months, and how it is accelerating here. You can click the image to see a larger version too.

MS makes the point that at least part of the decline is due to the producers, in a troubling economy, looking for any way they can to hold onto more of their cash, taking more deductions and greater chances with their returns … going John Galt. Please read it all. The numbers are tragic. But I find something more disturbing.

Declining Federal revenue in a time of recession is not new. What is disturbing though is that the trend is accelerating, even as the government spending accelerates. Normally, one would expect this to be a temporary condition. As the economy grows out of the recession, receipts begin to grow rapidly too. But that may be more difficult this time around because Obama plans on increasing the tax burden on the producers in order to fund this out of control federal spending which shows no signs, as we have point out, of stimulating any economic growth.

The only recourse is to either raise taxes, which as you can see from the chart above will not likely lead to increased revenue, or cut spending … and that clearly is not happening with these folks.

The Government only recourse then is to borrow, but as we have seen … Treasury auctions, where a government borrows, are going wanting, forcing the government to discount their offerings, leading to higher interest rates … leading to … stagnation, or worse, a renewed recession.

The government had to pay greater interest than expected in a sale of 30-year Treasurys. That is worrisome to traders because it could signal that it will become harder for Washington to finance its ambitious economic recovery plans. The higher interest rates also could push up costs for borrowing in areas like mortgages.

There is no happy ending to this kind of tax, spend, borrow, tax cycle. And the numbers bear that out. Which is why John McCain was indeed right when he said this.

Amen and I worry.

Emotion will not help you understand fuel prices

Geithner plan is a give away, moral hazard thrives!