The Internet was buzzing last night and this morning about how the New York Times left out what Rick Green at the Hartford Courant refers to as the attorney general’s accurate account of his service in the same speech when he said he served in Vietnam. But Blumenthal’s remarks were mutually inclusive.

I’ve got an image that represents my opinion on this subject at the end of this post, but I just want to point out the attorney general did not contradict himself in videotaped remarks to senior citizens in 2008.

Blumenthal: “I really want to add my words of thanks, as someone who served in the military, during the Vietnam era, in the Marine Corps.”

Blumenthal: “We have learned something very important since the days I served in Vietnam.”

If we are going to use first sentence by Blumenthal to prove he misspoke in the second sentence – using it as some sort of gotcha against the New York Times and the McMahon campaign – Blumenthal would have had to say something like this.

Not Blumenthal: I really want to add my words of thanks, as someone who served in the military, not in Vietnam, but during the Vietnam era, in the Marine Corps.

Blumenthal: “We have learned something very important since the days I served in Vietnam.”

The above are mutually exclusive statements. Both could not be true at the same time and could bolster the argument he simply misspoke in the second sentence at this event.

Update: As an added point, more misplaced words have been identified by other reports. Ed Morrissey at Hot Air wraps up some of them, but there are more reports out there. The examples are not exclusive to this one speech in 2008.

My current opinion is clear in the image (click to enlarge). Now, can we move on from all of this? Those of you who are trying to convince – really brow-beat is a better term – the Blumenthal supporters that the attorney general is a liar and disgraceful because of his statements and should not be in the Senate are barking up the wrong tree. 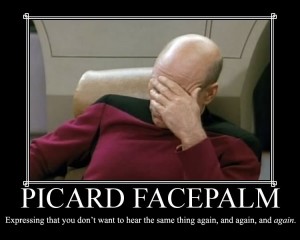 If you keep pounding and pounding, do you really think a light bulb is going to go off in someone’s head and they will “see the light?”

Same thing for those of you doing anything and everything to support Blumenthal by constantly bringing up George W. Bush and his service. It won’t work.

It’s all getting pretty old. If you want to take the lead to spread the word of conservatism – or liberalism, socialism, progressivism, or moderatism – you may wish to try the teach and mentor approach instead of the screaming and yelling approach.

Was immigration question on “papers” for Michelle Obama a plant...