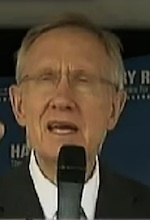 Ever wonder how the flacks and hacks make their millions while in Congress?

“In 2004, the senator made $700,000 off a land deal that was, to say the least, unorthodox. It started in 1998 when he bought a parcel of land with attorney Jay Brown, a close friend whose name has surfaced multiple times in organized-crime investigations and whom one retired FBI agent described as “always a person of interest.” Three years after the purchase, Reid transferred his portion of the property to Patrick Lane LLC, a holding company Brown controlled. But Reid kept putting the property on his financial disclosures, and when the company sold it in 2004, he profited from the deal — a deal on land that he didn’t technically own and that had nearly tripled in value in six years.

When his 2010 challenger Sharron Angle asked him in a debate how he had become so wealthy, he said, “I did a very good job investing.” Did he ever. On December 20, 2005, he invested $50,000 to $100,000 in the Dow Jones U.S. Energy Sector Fund (IYE), which closed that day at $29.15. The companies whose shares it held included ExxonMobil, ChevronTexaco, and ConocoPhillips. When he made a partial sale of his shares on August 19, 2008, during congressional recess, IYE closed at $41.82. Just a month later, on September 17, Reid was working to bring to the floor a bill that the Joint Committee on Taxation said would cost oil companies — including those in the fund — billions of dollars in taxes and regulatory fees. The bill passed a few days later, and by October 10, IYE’s shares had fallen by 42 percent, to $24.41, for a host of reasons. Savvy investing indeed.””

Can we put Reid’s comments about Obama in context?

Yes, there are conservative conspiracy-theory nuts out there

US to Lose $25 Billion on GM Bailout
Scroll to top