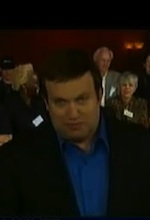 You have to watch to believe my little hostage takers. The politically correct left stands up to defend Obama’s hostage taker comment and … well all heck breaks lose. It’s as entertaining as it is revealing. Apparently political correctness gets tossed right out the window when it comes to the One. “It was just a metaphor.” Heh.

The conversation begins with a quick look at the young President’s comments from two days ago likening Republicans to hostage takers. Clearly it’s a sop to the left. Don’t worry guys, the devil made me do it. And apparently it worked swell with the lefties in this group. But the conservatives looked confused, as in, “Hey, I thought we shouldn’t use language like this?”. One lefty went so far as to blame it on speech writers. Ughhh. The One is Teflon for sure.

While you are watching, make sure you make special note of the unemployed woman at the 3:30 on the tape. Right after she hammers the businessman for being greedy, she checks her Blackberry. Too much.

Obama: Republicans are the reason you may not get your unemployment check

Linda McMahon and the WWE vs Democrats: living in a glass house
10 replies

Maybe the most heartwarming video you will see this Christmas

Q. What do tin, tantalum, tungsten and gold have in common?
Scroll to top