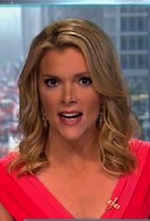 Without question, one of the most entertaining segments I have ever seen on Fox News. And what makes this clip even more spectacular is that its a Fox anchor against a regular Fox analyst.In one corner, wearing the pink dress, Megyn Kelly, introducing the tape where California Congressman Brad Sherman tells his town hall meeting he knew nothing about the New Black Panther voter intimidation case, and its dismissal by DOJ. In the other corner Kirsten Powers, Democrat strategist wearing the red top, telling Kelly, ahh, what’s the big deal? No voter intimidation anyway.

Before we venture into the ring with these two women I would like to draw your attention to two things that struck me as I watched this live, unfolding before my eyes, while trying desperately to get my doctor mandated hour rest before starting work again.

1. Powers handles the debate miserably. She starts by saying she did not see any voter intimidation in the original tape … even throws in the Fox is making a big deal about the “scary black man” thing. I’m sorry, what?

2. Kelly started the fight by telling Powers she didn’t know what she was talking about (she didn’t), and insulted her, when she should have let Powers speak and come back with testimony contradicting her “no big deal” statement. But then, that would have been no fun. Enjoy.

Editor’s note: I usually record Andrea Mitchell “NBC News” at that hour … so by the time I switched the recorder I lost half of the debate. Thus I am using Hot Air’s video, which is complete.

Oh, and for your information. Congressman Sherman has issued a press release on his ignorance to the case. Apparently he really was ignorant, which is a horrible indictment of the Main Stream Media.

When asked to comment for this story, Sherman issued a written statement noting there had been scant mention of the Black Panther case in the local newspapers and other media he follows.

“In contrast, Fox News covered the issue repeatedly,” he said. “Also, since Fox News began its attacks on me, we have received hundreds of communications, a small portion of which are actually from within our district.

“I will soon send a letter to Attorney General Holder regarding the importance of allegations of voter intimidation, and the Philadelphia incident in particular.”

White House spokesman Robert Gibbs gave a similar answer last week when asked about the controversy. He said he has not been paying attention to the case.

Ben Stein and Kirsten Powers Mix It Up

Scandal in the Department of Justice?

Another liberal who has not read the Arizona illegal immigration law