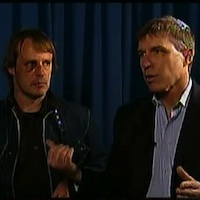 I can never say enough good things about news crews who literally put their lives on the line in very dangerous situations to bring truth to the American people. Such is the case with FNC crew Greg Palkot and Olaf Wiig who were beaten to a bloody pulp after things turned bad for journaliusts in Egypt last week. Warning: some of the video of their injuries is stomach churning.

Fox News gives the background on the beating and is followed by a brief section of the entire interview:

Fox News correspondent Greg Palkot and cameraman Olaf Wiig were in Tahrir Square during the worst of the violence last week. When the building from which they were reporting came under siege, they were forced to flee into the streets and right into the middle of pro-government supporters.

The two were both severely beaten — to the point they had to be hospitalized. The two have now returned to London, and in their first interview since the incident, recounted the danger they experienced.