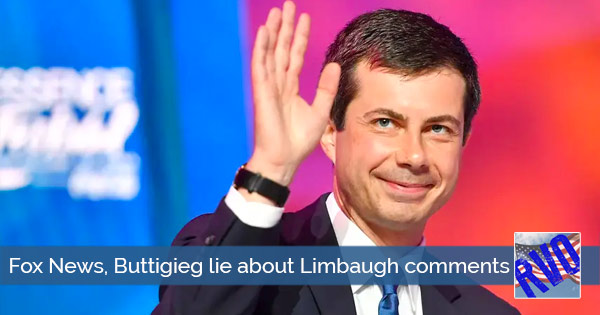 This is annoying as hell, and it’s going to continue for months.

I listened to the portion of Rush Limbaugh’s show on Wednesday – during a five-hour drive from Pennsylvania – where he discussed what the Democrats must have been thinking after the New Hampshire results. The transcript is available – word-for-word – to anyone who is willing to take two minutes to find it.

Then I see this headline on the Fox News website this afternoon. 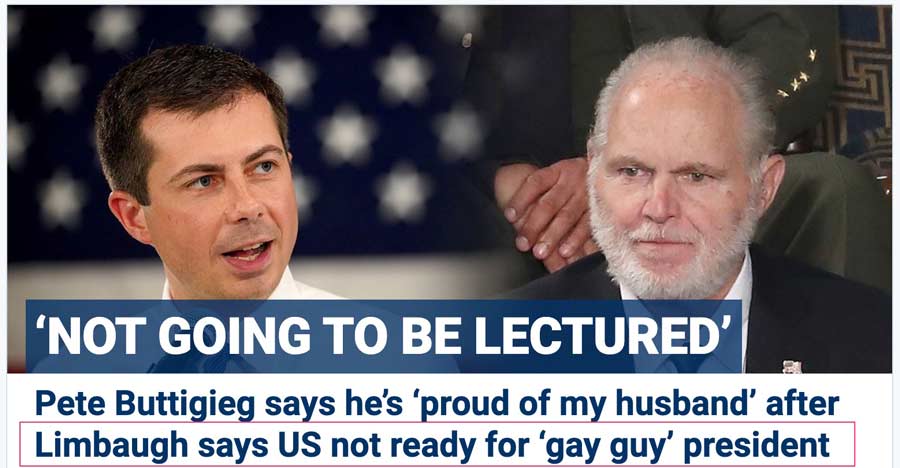 “Limbaugh says US not ready for “gay guy” president.” This is a complete fabrication; a total lie. He never said anything like it.

From the Fox News article, with the completely out-of-context quote emphasized by me.

Buttigieg continued: “And I’m not going to be lectured on family values from the likes of Rush Limbaugh or anybody who supports Donald J. Trump as the moral as well as political leader of the United States. America has moved on and we should have politics of belonging that welcomes everybody. That’s what the American people are for. And I am saddened for what the Republican Party has become if they embrace that kind of homophobic rhetoric.”

Limbaugh said this past week that he envisioned Democrats concluding that “despite all the great ground that’s been covered, that America’s still not ready to elect a gay guy kissing his husband on the debate stage for president.” His comments came just eight days after President Trump awarded Limbaugh the nation’s top civilian honor during the State of the Union address.

You’ll note the qualifier in there about “Democrats concluding…” That’s a nice effort, but the implication is clear. They cut the quote completely out-of-context. This comment was directly related to what the Democratic National Committee must be evaluating when looking at the current top-three candidates. It’s absolutely on-point.

If you’re wondering, this is just another reason why conservatives will vote for Trump. Limbaugh is not homophobic, racist or misogynist. I’m not going to speak for Rush, but Limbaugh and conservatives are fans of constitutional conservatives. Lifestyle, race or sex don’t matter. When it comes to the United States Constitution, are you in or out? We’re fighting on policy issues, but when liberals can’t win on policy issues, they pull a discrimination card every time. It’s unending.

Again, the full transcript of Limbaugh’s show on Wednesday is right here. Here is the pertinent portion of the transcript. My emphasis is added.

RUSH: I want to finish what we started here, and I want to present you the options I think the Democrat Party’s faced with after what happened at the Hawkeye Cauci and in the New Hampshire primary.

But first, more evidence that you’re right where you need to be if you want to know what’s first and if you want to be cutting edge political analysis. Last night CNN special coverage New Hampshire primary, former governor Terry “the Punk” McAuliffe, the Clinton campaign, the Clinton White House, governor of Virginia, had this to say.

MCAULIFFE: You’ve gotta give this guy credit. I mean, he came in first in Iowa. It looks like he’s gonna be second tonight. This is a guy, a mayor of a small town. A year ago, nobody gave this guy a chance.

RUSH: He’s talking about Mayor Pete Buttigieg. Nobody ever heard of this guy. Nobody knew where this guy was. Nobody… Uh, not so fast. Let’s go back to 11 months ago today.

RUSH: Snerdley has been ticked off at me for making that observation nearly a year ago, because Snerdley believes had I not made the observation, a lot of people would not have given Mayor Pete Buttigieg the time of day. But just to illustrate. Now, Mayor Pete is, like every other leftist Democrat in this whole roster, a fraud in the sense that he’s trying to cover up the fact that he is a radical leftist.

His dad was a Marxist communist, who loved the Communist Manifesto. Mayor Pete’s trying to carve a niche for himself where he’s not Crazy Bernie’s got that all wrapped up. But I don’t care who the Democrats nominate. The party, as we’ve said, is gone. It is a far-left party now. There isn’t any moderate wing of any significance or size. There isn’t any segment of it that is not some flavor or form of socialist. They want you to believe that it is.

They want you to believe that Crazy Bernie’s off on a tangent and that he’s not really defining policy set for the Democrat Party. But a party is what its base is, and its base is maybe even to the left of Crazy Bernie. So let’s say you’re the Democrat establishment, and you’re faced with some hard, cold truths. You got Bernie number one, Buttigieg number two, and Klobuchar with her Klobmentum number three.

You’ve got Fauxcahontas way back there in the background barely out of the tepee bringing up the tail end. Biden’s gone. So you’re faced with a dyed-in-the-wool socialist who’s not even a Democrat; a gay guy, 37-years-old, loves kissing his husband on debate stages (can you see Trump have fun with that?), and Amy Klobuchar. So you are whoever the grand pooh-bahs in the Democrat Party are.

You’re looking at your options today (laughing), and you’re asking, “Okay, can we win with Klobuchar? We don’t want to put Klobuchar up there because she doesn’t have a prayer. Trump’s gonna wipe the floor with her, and that would mean two women in a row get wiped out by Donald Trump. Two Democrat women in a row. We can’t have that! We can’t let that happen.”

There may be some Democrats who think, “That’s exactly what we need to do, Rush. Get a gay guy kissing his husband on stage! You ram it down Trump’s throat and beat him in the general election.” (laughing) Really? Having fun envisioning that. What are you left with? Crazy Bernie. They’re left with the avowed revolutionary socialist who isn’t even a Democrat.