They will. I’ve had conversations with people who said this to me. “Look, stop hyping this all up. They are not confiscating guns, they just want to limit the selection … you know… you don’t need a 100 round magazine drum.” Yeah, OK.

Below is a redacted letter sent to a New York City resident. One of the firearms the owner is in possession of a Marlin 25N, a bolt action .22LR caliber rifle with magazines that can hold more than five rounds. If you’re not familiar, it’s the kind of rifle you would use to teach an 8-year-old kid how to shoot and handle a firearm safely.

The Armalite AR-7 is a similar, semi-automatic .22LR rifle, and the Izmash is another target, .22LR bolt action rifle. The letter reads as follows, with the emphasis in the original.

Let me point out here, it’s not just the “high-capacity” magazines that are unlawful to possess, it’s the rifle that is illegal to own. Since this person was “caught” in possession of these rifles, he’s a criminal and the city is giving him an opportunity to make things right. The owner has options…

So if New York can ban and quite honestly effectively confiscate a .22LR bolt action rifle, what would stop them from banning and confiscating a small Smith & Wesson Shield in 9mm with an seven-round magazine?

The anti-gun, anti Second Amendment crowd wants to record ownership of the guns you own. They will confiscate them or create regulations rendering them as useless to their owners. They do not believe gun owners can be trusted. They think there is something wrong with people who want to own guns so therefore they must be monitored.

What part of “shall not be infringed” don’t these nuts understand? 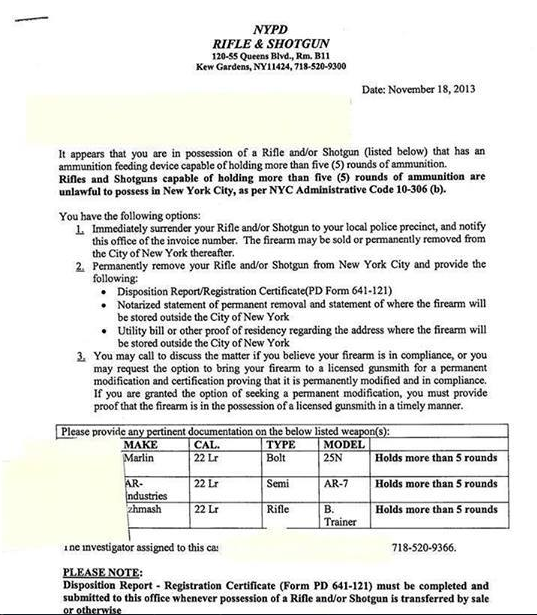 Allen West is wrong… Closing of lead smelting plant will not increase...
Scroll to top