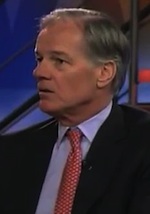 The title says it all and explains why I could never back Foley with any kind of passion. Foley announced today he would concede the election, even as the Republican Party told the state it would fight on for the integrity of the system. Foley wanted to be Governor and it doesn’t surprise me fighting for the people of Connecticut was nothing more than a campaign slogan.

Foley’s concession essentially amounted to this. Yeah sure, there were voting “irregularities”, but what the heck. I lost”.

Foley, 58, a businessman and former U.S. ambassador who spent $10 million of his own money trying to succeed Gov. M. Jodi Rell, said his lawyers’ investigation found numerous irregularities in Bridgeport, but none that were willful.

“So the election Tuesday, although very close, was a conclusive victory for Dan Malloy, and this result should not be questioned,” Foley said. “I hope my supporters accept my word on this.”

Changing the outcome would have required Foley to legally challenge the validity of votes cast using ballots produced by photocopying machines after Bridgeport ran out of regular ballots. From the start of his review, Foley said, he had no intention of objecting to the emergency use of the photocopied ballots, which allowed voting to continue.

“I believe they do represent legitimate votes of well-intended voters and must be included in Tuesday’s results,” Foley said.

So let’s see. In Bridgeport we have poll workers on tape mixing official ballots with sample ballots, voters allowed to vote who were not registered, registered voters receiving multiple ballots and what does Foley say? “So the election Tuesday, although very close, was a conclusive victory for Dan Malloy, and this result should not be questioned.” And how does Mr Foley know that the irregularities were not willfull?

In the meantime State Republican Chairman Chris Healy told me this morning that he intends to file a complaint with the US Attorney’s office. Here’s today’s podcast with the Healy interview but listen in particular toward the end of the interview as Healy explains why he is filing a complaint. It’s about the integrity of the system.

In a radio interview Monday morning with commentator Jim Vicevich, Healy said that the election in Bridgeport was “a circus” that was “completely out of control.”

Healy also described the Bridgeport election as “a complete farce” that needs to be investigated.

You can listen to the entire audio by clicking here. Kudos to Healy who knows what is at stake. The integrity of the system. Good riddance to Foley. I saw the character flaw in January after his first appearance on Face the State with Dennis House. He was a rich guy looking for another title and clearly out for himself. A guy who wanted to play Governor, not be Governor. It was never about the people of this state, or the fiscal emergency facing Connecticut, it was about him, a throwback to the original elitist RINOs that we will continue to purge from the party.

My instincts are always right. Always.

UPDATE 2: As I was reviewing my Foley video clips I cam across one that caught my eye. I had forgotten that Foley had told Dennis House that he intended to run for Senate against Dodd, then withdrew after Dodd dropped and Blumenthal jumped in. Just one more sign that this RINO was just fishing for a job. As I told you for months, he’s not a leader, except a leader of his own personal agenda. Instead of being a hard charger and self starter, clearly he shows he a self promoter and resume enhancer.

Connecticut tax revenue up … Until tax increases implemented 16 months ago

In spite of the election, socialism marches on