I do not condone burning the United States flag. I think it’s best to ignore those who make a spectacle of themselves doing such a thing while basking in their First Amendment glory. That said, LSU graduate student Benjamin Haas is a lunatic. He plans to burn the flag in support of a (most likely) drug-induced criminal spree that happened to include burning the US flag. 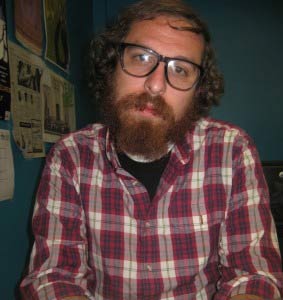 Really dude, why would you do this in support of this guy?

From 33News in Baton Rouge. The wanted individual – who has since turned himself in – holds dual citizenship for the United States and Columbia.

LSU Police have issued an arrest warrant for Isaac Eslaya, 23. Eslaya is an LSU student and is believed to be responsible for the flag burning incident. He faces two felony counts of Simple Criminal Damage to Property, Arson, Theft, Resisting an Officer and Possession of Drug Paraphernalia. …

Police did recover a stolen vehicle, which they believe was used by Eslaya. The LSU flag that was burned was recovered inside the vehicle along with drug paraphernalia, a clothing item belonging to the suspect and red and black spray paint.

Detectives have also learned that the same day as the flag burning, The Venue Apartments located north of campus were vandalized by graffiti using red and black spray paint and were able to connect the suspect to the crime.

In other words, this was not a guy out there holding a protest and burning a United States flag that he purchased or was provided. It seems he went on a drug-induced criminal spree that lasted for hours and culminated in tearing down a US flag from a War memorial and burning it before he ran away to hide. It was not his property to burn.

I’ll admit, I tried to find a blog or a actual quote from Benjamin Haas concerning this event, but there was nothing. WBRZ in Baton Rouge has the following story, with no direct quote from Haas. If WBRZ was wrong in their reporting, I’ll revise this post. My emphasis in bold.

An LSU student is planning to burn an American flag on the school’s campus today as part of a peaceful protest.

Eslava is charged with taking the school’s American flag and burning it hours after the death of Osama bin Laden was announced last week.

No, let’s be specific here. The charges probably have something to do with the criminal behavior like stealing a car and taking private property (the flag from the memorial) and destroying it.

Haas says Eslava was expressing his right to freedom of speech when he burned the flag and should not have been arrested.

Are you kidding Benjamin? Since when is stealing property that does not belong to you and destroying it expressing a right to freedom of speech?

Update: Although I certainly don’t condone throwing water balloons and water bottles at people, it looks like the planned flag burning was canceled as a pretty large counter protest made it impossible for this guy to burn the US flag.

Christine O’Donnell getting slammed my MSM on 1st Amendment

What will Grayson do next?

Obama on border security … “I fixed it, now let’s talk am...