No cures. No treatments. California’s Prop. 71 initiative that pushed $3 billion in funding towards embryonic stem cell research five years ago has failed. The program promised to release cures and treatments held up by President Bush’s stupidity.

There have been plenty of advancements including treatments to illness using adult stem cells. Even the Catholic church is a supporter of stem cell research, which many find completely unbelievable since they do not understand the difference between “stem cells” and “embryonic stem cells.”

From Investor’s Business Daily, with my emphasis in bold.

Supporters of the California Stem Cell Research and Cures Initiative, passed in 2004, held out hopes of imminent medical miracles that were being held up only by President Bush’s policy of not allowing federal funding of embryonic stem cell research (ESCR) beyond existing stem cell lines and which involved the destruction of embryos created for that purpose.

Five years later, ESCR has failed to deliver and backers of Prop 71 are admitting failure. The California Institute for Regenerative Medicine, the state agency created to, as some have put it, restore science to its rightful place, is diverting funds from ESCR to research that has produced actual therapies and treatments: adult stem cell research. It not only has treated real people with real results; it also does not come with the moral baggage ESCR does.

To us, this is a classic bait-and-switch, an attempt to snatch success from the jaws of failure and take credit for discoveries and advances achieved by research Prop. 71 supporters once cavalierly dismissed. We have noted how over the years that when funding was needed, the phrase “embryonic stem cells” was used. When actual progress was discussed, the word “embryonic” was dropped because ESCR never got out of the lab.

Remember last year when it was quietly revealed embryonic stem cell research was obsolete? Do take a few minutes to read the full article by Bernadine Healy, M.D.

Even for strong backers of embryonic stem cell research, the decision is no longer as self-evident as it was, because there is markedly diminished need for expanding these cell lines for either patient therapy or basic research. In fact, during the first six weeks of Obama’s term, several events reinforced the notion that embryonic stem cells, once thought to hold the cure for Alzheimer’s, Parkinson’s, and diabetes, are obsolete. The most sobering: a report from Israel published in PLoS Medicine in late February that shows embryonic stem cells injected into patients can cause disabling if not deadly tumors. 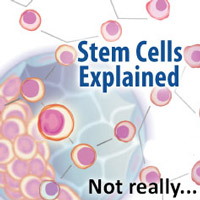 A liberal trifecta – climate change, stem cells and not drilling for oil
2 replies