Scott Fenstermaker has been on a publicity tour acting as though he is authorized to speak for the terrorists scheduled to make an appearance in federal criminal court. Fifteen months ago, Fenstermaker lost privileges and was removed from the military commissions civilian defense counsel pool.

Ed Morrissey at Hot Air has the exclusive story with information from a Pentagon source including a copy of the letter Fenstermaker received from Steven David, the chief defense council of the collection of attorneys who represented detainees at Camp Delta in Guantanamo.

Update: Ed now has more including an e-mail discussion and additional documents provided by Fenstermaker himself.

I’ve posted the letter at the bottom of this post under the O’Reilly interview from last night, but note it looks like the suspension was lifted specifically allowing Fenstermaker to represent one of the terrorists.

One June 1, The New York Times had a story concerning Fenstermaker and the dust up created when he said a terrorist wanted to be represented by him, but military lawyers said it was not true.

A New York lawyer, Scott L. Fenstermaker, has filed court papers saying he was retained by Mr. Ghailani to represent him in the New York case. But federal prosecutors have asked a judge to remove the lawyer, questioning whether he is authorized to act on behalf of the detainee and citing earlier cases in which he tried to represent Mr. Ghailani and other detainees but was prevented by judges from doing so.

Military lawyers who have represented Mr. Ghailani at Guantánamo say he does want Mr. Fenstermaker to represent him, and they are asking their superiors for permission to come to New York to help defend him in civilian court.

The Ghailani case is not the first time that he has clashed with the authorities over his representation of detainees. In 2007, another federal judge in Manhattan dismissed a petition he filed on behalf of Mr. Ghailani and other detainees. The judge noted that Mr. Fenstermaker had not met with or spoken with the detainees, nor was he “truly dedicated” to their best interests. Mr. Fenstermaker has appealed the ruling.

Last August, a federal judge in Washington removed him from an action he had filed claiming that Mr. Ghailani was being held illegally. That case was dismissed.

That same month, Mr. Fenstermaker was suspended as a member of the pool of civilian lawyers who work with military lawyers in defending detainees at Guantánamo, court records show. The military office that represents detainees wrote that his dealings with some of its lawyers had “been counterproductive” and that he had “not been forthright” about his representation of certain detainees.

In March, his suspension was lifted — but only in Mr. Ghailani’s case.

I mentioned this morning that something seemed totally off about Fenstermaker, his demeanor and his attitude on The O’Reilly Factor last night. As a matter of fact, I first wrote that post last night and elected to sleep on it before posting and tweaked some of the language this morning before hitting the publish button.

The guy seems like a strange duck. He’s going around telling people he is working on the defense team, but will not be working the case in the courtroom. Then we find out he was removed from the pool of lawyers authorized to represent terrorists except for Ghailani. 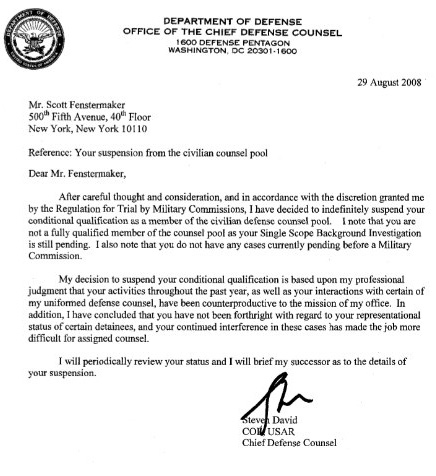 Chris Christie to Dan Malloy: I got the job done. How ’bout you? Video