There has been a lot of discussion concerning where the money really is on conservative blogs, the Wall Street Journal and the Rush Limbaugh show. I heard Limbaugh discuss the subject during his first hour yesterday and I thought his presentation was a bit confusing to listeners. 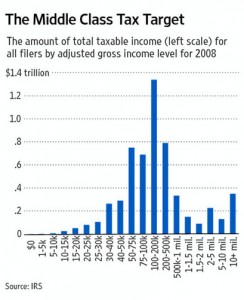 Limbaugh kept taking about confiscation of all wealth and confiscation of all income which was confusing. No offense to Limbaugh, but sometimes subjects like this are best delivered in written form, and I’ve been touching on this exact subject since October 2008 and have referred back to, and expanded on the same topic multiple times including here.

I’m going to apologize in advance since my chart is 2006 numbers and the Wall Street Journal is using 2008 numbers. I have not updated my charts.

From Limbaugh yesterday when referring to 2008 numbers…

“But assume that tax policy confiscated,” just took everything, “all the taxable income of all the ‘millionaires and billionaires’ Mr. Obama singled out.

“That yields merely about $938 billion…” We’ve got a $4 trillion White House budget, and you take it — and you can do it one time. When you confiscate, it’s gone.  They’re not gonna have the same amount of money.  You’re taking everything they’ve got: $938 billion.  That’s what you would raise.  Not even one-fourth of the Obama budget.  The dirty little secret is $2.5 trillion is what you would raise, if you confiscated ALL income.  They can’t tax enough to get out of it.

On April 17, the Wall Street Journal posted a chart identifying where the money really is when it comes to income. The figures are from 2008 which represent the most recent set of data provided by the IRS. John Hinderaker at Powerline pointed out the chart which is similar to the table I created in Oct. 2008 using 2006 data. The Wall Street Journal used the adjusted gross income figures and I used the total tax collected from the IRS website.

When it comes to federal income tax collected in 2006, more than 38 percent of the revenue collected is from taxpayers and taxpayer families earning between $50,000 and $200,000. That’s where the money is … in the middle class. The well-off – making more than $200k – represent less than 3 percent of the total returns submitted. If you’re targeting the “really rich” like President Obama is doing – those earning more than $1 million – you’re talking about 350,000 returns … only one-quarter of 1 percent of the returns.

If you just flat out took every single dime earned by everyone in the United States in 2008, my table shows the total tax collected was a bit over $1 trillion … the 2008 budget was $2.9 trillion and the 2009 budget was $3.1 trillion. Of course, we were not running $2 trillion deficits in 2008 and 2009 – since the federal government has other sources of revenue including corporate taxes and a multitude of fees – but this is still a very valuable exercise to help us understand we have a spending and math comprehension issues.

Limbaugh also discussed how the rich paid more taxes due to the Reagan and Bush (43) tax cuts. I wrote what I think is a very good explanation of these facts back in Nov. 2008, with charts and everything. But there is one other thing to remember specifically about the Bush (43) cuts. From my Nov. 2008 post.

We must continue to point out the truth about what happens when you reduce the tax rate.

All the President’s taxes

Krauthammer: Trump is the Al Sharpton of the Republican party