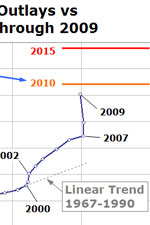 Personally, I think federal spending has been out of control for decades, starting with the New Deal programs that began the incremental shift of project funding from states and local communities to the federal government. That trickle – if you can call it that – may now equal or surpass the power and flow of Niagara Falls.

Federal spending has gone insane, bursting all historical bounds, since the Democrats took control of Congress in January 2007. Our friend and technical adviser Joe Malchow forwarded a link to the site Political Calculations, which posed this question:

If you were asked to produce a single chart illustrating the biggest single political issue in America today, what would it look like? 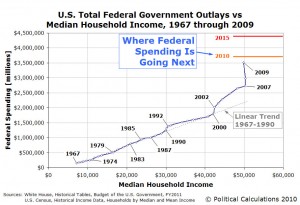 The Republican budget alternative that wasn’t

And, here is my plan…

The stimulus pulls an o fer! Didn’t stop the recession and create job...

One more black eye for Obamacare
Scroll to top