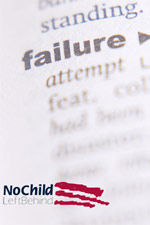 Secretary of Education Arne Duncan is asking Congress to put politics and ideology aside – for the good of the children – and come up with $23 billion to save education in America. What did you really expect would happen? The $100 billion in stimulus funding was just the tip of the iceberg.

This is a great example of a symptom of the disease. You see, over the past few decades local school districts have become more and more dependent on the state for funding elementary and secondary education. But it did not end there. With stupid federal programs like No Child Left Behind, the states and local school districts became dependent on the federal government.

This incremental of power from local communities, to the states and then on to the federal government is the disease that I’ve been writing about for more than two years now. This is the problem that must be at the top of our issues during the next two decades.

Funding for local issues by the federal government is destined for failure, and from what Duncan is claiming, we’re at the education failure point and the only people who can solve the problem is Congress; by throwing $23 billion at the problem immediately. From Fox News…

Education Secretary Arne Duncan is asking lawmakers to put aside “politics and ideology” as they consider a request for $23 billion in “emergency” funding for public schools – a measure Republicans reject as a massive federal bailout for the teachers’ unions.

The Obama administration is supporting the bill, formally titled the Keep Our Educators Working Act and sponsored by Rep. George Miller (D-CA) and Sen. Tom Harkin (D-IA).  In a letter to House Speaker Nancy Pelosi (D-CA) and Senate Majority Leader Harry Reid (D-NV) dated May 13, Duncan warned that if the bill is not enacted, “millions” of school children will be adversely affected and the ensuing damage will “undermine the groundbreaking reform efforts underway in states and districts all across the country.”

Of course, this is being sold as a bipartisan issue. Who in God’s name could even consider being against this critical legislation!

This has been the plan for liberals all along. They want local school districts to depend on funding from the state and federal government to the point where if they don’t get it – they have to close the doors.

The “Recovery Act” stimulus sham gave $100 billion to school districts in part to allegedly “save teachers jobs,” but a year later the stimulus has worked so well that they’re going back to the trough for more.

SEIU members: Are you proud your brethren terrorized a teenager?
Scroll to top