Jim Hoft over at Gateway Pundit is wondering where the heck the media is on this story. Why are they ignoring the fact the federal budget tripled between 2008 and 2009? For the last 12 months the deficit is $1.4 trillion. 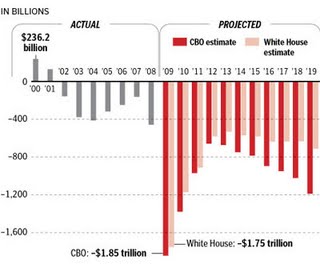 You’ll note this did start with the Bush administration unwarranted bailouts and out-of-control spending starting about one year ago.

This is by no means just the Obama administration, but I’m writing my headline just as the AP would write it if a Republican was running the Executive Branch. This is a United States Congress-critter problem – they have too much power and too much money to spend, paying off each other with spending program after spending program.

With the huge acceleration of spending that started in January, I would not be surprised to see the 2009 calendar year deficit get close to $2 trillion.

The Congressional Budget Office estimate, while expected, is bad news for the White House and its allies in Congress as they press ahead with health care overhaul legislation that could cost $900 billion over the next decade.

The unprecedented flood of red ink flows from several factors, including a big drop in tax revenues due to the recession, $245 billion in emergency spending on the Wall Street bailout and the takeover of mortgage giants Fannie Mae and Freddie Mac. Then there is almost $200 billion in costs from President Obama’s economic stimulus bill, as well as increases in programs such as unemployment benefits and food stamps.

The previous record deficit was $459 billion and was set just last year.

I’m remembering a bunch of liberals complaining in the pas about previous budget deficits, and the media was reporting numbers quite frequently…

This is my congressman…