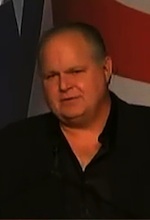 Nothing in this world surprises me anymore, and Rush would be the last person on earth to whine but …ummm … anyone else here see a double standard? (Don’t answer that. That question is merely a rhetorical device.) The best part of this story: the way Facebook turns itself into a pretzel to explain the difference.From the Daily Caller:

At the end of last week Facebook announced that it had allied with the Gay and Lesbian Alliance Against Defamation (GLAAD) to remove what it considers anti-gay references from the social networking site.

“This violent, hateful speech has no place in our media – whether it is in print, on the airwaves or online,” GLAAD President Jarrett Barrios said in a press release. “Facebook has taken an important first step in making social media a place where anti-gay violence is not allowed.

But as the Daily Caller points out, when given the chance to explain why Facebook allows such sites as “I Hate Rush Limbaugh” and “Rush Limbaugh should Die Slowly”, well, you can imagine the college boys who made billions posting people’s private information, had kind of a tough time.

Direct statements of hate against particular communities violate our Statement of Rights and Responsibilities and are removed when reported to us,” Noyes wrote. “However, groups that express an opinion on a state, institution, or set of beliefs — even if that opinion is outrageous or offensive to some — do not by themselves violate our policies.

Christine O’Donnell getting slammed my MSM on 1st Amendment

Nancy Pelosi: Hey, what say we spread the wealth around a bit – Video
Scroll to top