Class warfare. Socialism. You’re watching it develop and take root all around us. In New York City, where some fast food employees are making minimum wage ($7.25 per hour in New York), some of them are demanding wage rates double to $15 per hour.

Workers at some fast food restaurants in the New York City area walked off the job on Thursday.

A large group gathered outside a McDonald’s on Madison and 40th St. in Manhattan demanding higher wages and the approval of a workers union.

“They’re giving us $7.25 an hour, so many of my co-workers are living on food stamps. You can’t live on that in this city,” a protester told Good Day NY.

The workers who say they don’t make enough to put food on the table for their families would  like an increase in their hourly pay to $15.

They would “like” an increase? They don’t make enough to put food on the table? Why pick a completely arbitrary number of $15 per hour? Why not $25 or $50 an hour?

Simple economic talking points to share. If the fast food chain owners greatly increases their payroll costs, what would happen?

But at least those complaining would win their argument, and a few of them might be lucky enough to have that prized $15 per hour salary for a week or so. I have to ask if we have a mental disconnect here. Employees asking for a 100% raise? Do they not see the implications? I really think this is the result of 50-plus years of brainwashing as we come closer to the peak of the entitlement society. This is class warfare, pure and simple. Who is John Gault?

Without further adieu, I introduce you to the Jean-Luc Picard Facepalm. 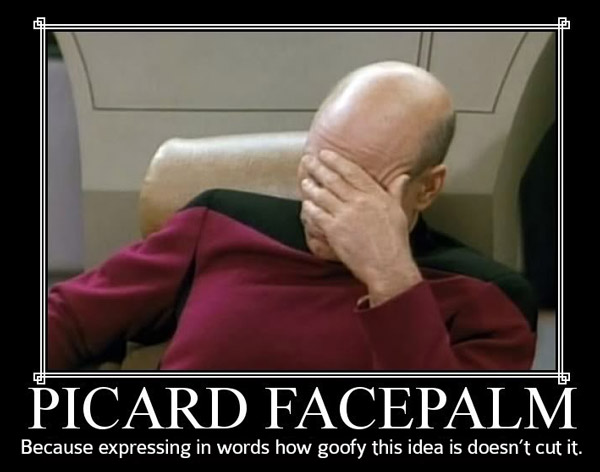 Is the minimum wage increase helping?

Ramirez: The Compromise
Scroll to top