There are two strategies working for the environmental wacko crowd. There is the quick rebranding of the initiative from global warming to climate change, and the efforts to brainwash kids. Brainwashing clearly falls into the immoral category when it comes to teaching kids.

I’m not sure how else I can describe it. Yes, temperatures fluctuate. That’s been happening to the earth forever; directly linked to natural events like volcanoes and the sun’s activity. How can we expect to build a strong, independent, caring society when leaders begin education with brainwashing?

npower – Britain’s brightest dimmest energy company – is sponsoring the Climate Cops Web site, gauged towards kids between seven and 11. To enroll in the academy, you complete three missions. There are three, what I would call Japanese-rendered characters, to help you. Since environmentalists have been able to get kids to cry when they see a picture of one; a polar bear is involved.

One mission asks the kids to “punch-out” the power. If your kids play this game, watch out. They might start running around the house turning off computers in the middle of an update or backup. Wonderful.

The Climate Cops HQ provides the normal propaganda – screen savers and posters – but also includes convenient climate crime cards that allow the new cops to investigate crimes in their home. As an example, one of the cards lets kids know that it is a sin to leave a cellphone charger plugged in when not charging a phone. 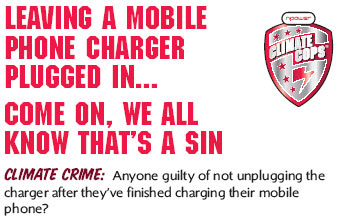 Along with games and cards, lesson plans are available for educators. Nowhere in the education materials can I find a suggestion to take advantage of America’s home resources, including coal and oil, responsibly. (Note that npower is a UK company)

No promotion of clean – and abundant – nuclear power either.

…Climate change is a natural process and happens naturally over time, but we as humans have speeded up the climate change process and our environment is now unable to adapt to it. This may be because the Earth’s atmosphere is warming up – global warming. The result is more severe weather. We are already seeing increased droughts in many countries, with heavy rain and winds causing flooding and structural damage in others.

…This is a worldwide problem and unfortunately we cannot undo the damage that has been caused over the years, but we can do our bit to stop it from getting worse so quickly by being more environmentally friendly.

…There is now clear evidence that global warming and climate change are a reality that will have damaging effects on sea levels, water supplies and current agricultural patterns, worldwide.

…There is little doubt that one of the causes of climate change is the emission of large volumes of the main greenhouse gas, carbon dioxide, created by burning fossil fuels such as oil, gas and coal.

Andrew at DodgeBlogium has this:

Climate Cops is yet another aspect of the fascistic like tendencies of the enviromental [sic] movement. This site encourages young children to report on their parents for “crimes against the fatherland enviroment [sic]”. Its rather creepy and reminds one of the rules for the Hitler Youth and other similar entities in communist regimes. I can imagine what a parent will say when confronted by their own little Climate Youth.

Here’s some information about npower from their Web site:

“Climate change”: show me the money Update: Hillary to the Rescue