Now really, what did you expect? Like it or not, the managers and executives at AIG have specific value in the market place. You may think that they are all worth nothing, but many companies see the AIG kerfuffle as an opportunity.

The obligations that AIG had to managers were contractual payments everyone knew about when the government took an 80 percent stake in AIG in return for an $85 billion cash infusion in September.

All of a sudden, people are outraged about the bonuses for AIG employees. Since the people are now fully invested – not by their own choosing – into AIG, the obvious problem rears it’s ugly head.

Citigroup canceled the delivery of a new jet when politicians – and citizens – freaked out. Even I wrote that it was a bad marketing decision, not necessarily a bad business decision. Did you know that Citigroup was trying to sell two older jets worth $27 million each? The new jet was going to cost an estimated $50 million for a “profit” of $4 million for the corporate aviation division.

What’s the right business decision? I’m not sure, but I know that if I owned a project that could cut costs at the aviation division by $4 million, and the response was we can’t do that, the public would get mad, I’d be looking to find a job somewhere else.

And that is what AIG CEO Edward Liddy is arguing. AIG needs to be able to pay employees something close to the market wage for similar positions at other companies or the employees are going to leave. Employees also do not want to be under a microscope by the Marketing Department when they make solid business decisions. Would you want to stay at a company like that?

Referred to as brain-drain. Liddy writes about the issue this weekend in a letter to Geitner after AIG was bullied into implementing measures to do everything possible and legally cut scheduled bonus payments.

…I would not be doing my job if I did not directly advise you of my grave concern about the long-term consequences of the actions we are taking today. On the one hand, all of us at AIG recognize the environment in which we operate and the remonstrations of our President for a more restrained system of compensation for executives. On the other hand, we cannot attract and retain the best and brightest talent to lead and staff the AIG businesses – which are now being operated principally on behalf of the American taxpayers – if employees believe that their compensation is subject to continued and arbitrary adjustment by the U.S. Treasury.

This is the simple reason why the government can not be involved like this. My fellow bloggers like Michelle Malkin are rightly ticked at the current situation.

Both parties in Washington created this Frankenstein. Make no mistake. President Bush, with help from now-Treasury Secretary Tim Geithner and his mentor Hank Paulson, pre-socialized the economy and stabbed fiscal conservatism in the heart with the original AIG bailout.

I’ve written about this non-solution before, and more Americans need to understand what is happening. This does seem to be the crisis the Obama administration wants to use to their advantage. Don’t let it go to waste!

Others have more today, including Malkin and LGF. Hot Air chimes in with video of Obama being outraged!

Exit question: What could have been done, or still could be done, to get government out of the way so these companies could succeed on their own? (How about massive corporate tax cuts and making the federal government smaller?)

The return on our investment (bonus section) 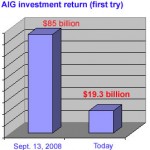 Click on the image to see how our first $85 billion did. That investment seems to be worth about $19 billion today, down more than 75 percent.

The government continues to pour our money into a bad investment. It’s kind of like a gambler who is $1,000 in the whole making another bet for $500 hoping they can take the winnings and pay off that first grand. The problem is, the gamblers keep loosing.

Realize this: the government is gambling here, pure and simple. Since the original investment of $85 billion, things have gotten even more confusing since the government has poured more capital into AIG.

The nasty little secret at the center of all the outrage is that the Obama administration could have stopped the bonuses by simply stopping the bailout.  They could have forced AIG into bankruptcy, which would have voided the company’s contractual compensation obligations.  Instead, the Obama administration chose to inject liquidity into AIG, following the lead of the Bush administration, which had done the same thing.  That kept AIG’s doors open, and therefore kept its contractual obligations to its employees intact.

There’s Nothing In The Treasury Anyway

Oh what a tangled web we weave …
8 replies

More than 50% there. Update: 100% there.The Satyr and the Peasent, a modern retelling – Video
Scroll to top