My interest immediately got me thinking about economic differences since data shows areas with a higher median family income have kids that do better in school. It’s not the student to teacher ratio, teacher benefits or dollars spent per student. I found it interesting that this report mostly avoided the cost spent per child.

The full report is 24 pages and a suggested read. Walter Williams had an article this week and quotes from the study.

[T]he longer American children are in school, the worse they perform compared to their international peers. In recent cross-country comparisons of fourth grade reading, math, and science, US students scored in the top quarter or top half of advanced nations. By age 15 these rankings drop to the bottom half. In other words, American students are farthest behind just as they are about to enter higher education or the workforce.

The racial gap is significant and a huge concern, but that can be directly attributed to the economic gap. Williams goes on to remind us about the failure of government involvement in education.

The teaching establishment and politicians have hoodwinked taxpayers into believing that more money is needed to improve education. The Washington, D.C., school budget is about the nation’s costliest, spending about $15,000 per pupil. Its student/teacher ratio, at 15.2 to 1, is lower than the nation’s average. Yet student achievement is just about the lowest in the nation. What’s so callous about the Washington situation is about 1,700 children in kindergarten through 12th grade receive the $7,500 annual scholarships in order to escape rotten D.C. public schools, and four times as many apply for the scholarships, yet Congress, beholden to the education establishment, will end funding the school voucher program.

The following is one of the reasons I enjoy reading Prof. Williams’ stuff and hope to thank him in person some day. He’s so right on the money here, with my emphasis in bold.

Any long-term solution to our education problems requires the decentralization that can come from competition. Centralization has been massive. In 1930, there were 119,000 school districts across the U.S; today, there are less than 15,000. Control has moved from local communities to the school district, to the state, and to the federal government. Public education has become a highly centralized government-backed monopoly and we shouldn’t be surprised by the results. It’s a no-brainer that the areas of our lives with the greatest innovation, tailoring of services to individual wants and falling prices are the areas where there is ruthless competition such as computers, food, telephone and clothing industries, and delivery companies such as UPS, Federal Express and electronic bill payments that have begun to undermine the postal monopoly in first-class mail. 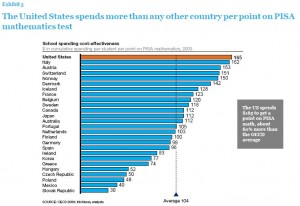 Obama asks for reform and more CASH for education system