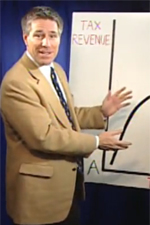 For those of you interested in a lesson about the Laffer Curve, here you go. I think it’s necessary to bring the topic of tax rates – and those of tax increases and tax decreases – a bit more into focus since the topic comes up so frequently.

I’ll tap the knowledge and experience of Dan Mitchell from the Center for Freedom and Prosperity. Mitchell discusses the confusion about the ideal point on the Laffer Curve, pointing out early in August that the goal of tax policy should not be to maximize revenue. He goes on to introduce his January 2008 three-part video series, which I have included below.

[M]y three-part video series on the Laffer Curve is a good summary of the key issues. Part I addresses the theory, and explicitly notes that policy makers should target the growth-maximizing tax rate rather than the revenue-maximizing tax rate. Part II reviews some of the evidence, including analysis of the huge increase in taxable income and tax revenue from upper-income taxpayers following the Reagan tax-rate reductions. Part III looks at the Joint Committee on Taxation’s dismal performance.

Going Galt in the UK