UPDATE: Makes sure you watch the video below. Quite an active group on such a cold day. Congrats to all who showed. Thanks to www.youtube.com/user/freedominnumbers for the raw video. And thanks to RVO reader Don H for the tip. If you want to see all 9 minutes head on over.

Here are some great pics of the rally in front of the Dodd fundraiser Friday afternoon … courtesy of Bob MacGuffie from Right Principles. That’s Tim Geitner in the trash can with “Odd Dodd”. Bob reports about 50 people showed up in absolutely freezing weather. Good job. 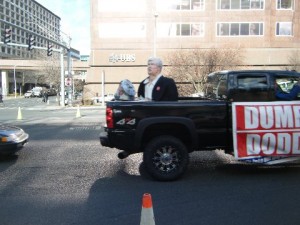 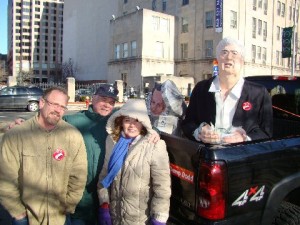 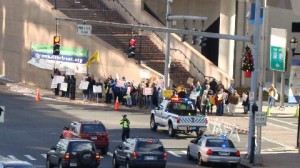 Bob says they made sure Vice President Joe and the Senator’s wife saw them on the way in and out. Dodd of course was not there to collect his cash. He stayed in Washington to help expand the Federal government. His wife stayed in Connecticut to pick up the dough. What a racket these guys have.

Here’s what the Courant says Biden said about his buddy Dodd:

No Joe, he’s getting the crap beat out of him because he didn’t tell the truth, on his mortgages, his home in Ireland, on his role in the Fannie Mae/ financial sector meltdown and the AIG bonus scandal. He’s getting the crap kicked out of him because he has lost touch with his constituents and because he, like you, continue to spend our money and expand government at a record pace. Other than that, you’re right, he’s a leader.

By the way, the AP article makes no mention of the protest. Not surprising. Insignificant? Absolutely not.  The crowd outside was about 1/4 of the size of the crowd inside … and they didn’t get lunch.

Dodd and Obama: trolling for cash along the gold coast

More debt for you and your childrenDemocrat Senators vote to pad Federal paychecks. Hold Defense Department ho...
Scroll to top