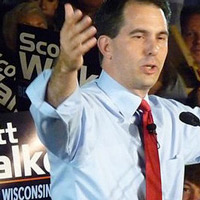 I don’t know much about the markets, but I do understand they react to current news and expectations for the future. My question is why – and I just saw this on referenced again on NBC’s Today Show at 7 a.m. ET – the media is referencing what Bernanke might say or do today in reference to the 2.37 percent Dow jump yesterday?

Since the Fed already has interest rates at historic lows, why not suggest Walker’s [big] win on Tuesday could be an indicator President Obama will not be elected for a second term … and the markets like it? That’s my speculation … how about you? Here is how the Associated Press explained the market jump. My emphasis in bold.

The rally started early and gathered force in the afternoon. The charge turned the Dow positive for 2012 and erased the biggest loss of the year less than a week after it happened: the 275-point plunge set off by a dismal U.S. jobs report on Friday.

Jeff Kleintop, chief market strategist at LPL Financial, said the market appeared to be turning on rumors and speculation. But the chatter was enough to convince some traders that the worst was over for now.

If the Associated Press can speculate and “hope” European officials will get their act together (good luck), I can speculate Walker was the reason for the US market jump yesterday, and I think my reasoning has a better foundation. I’m confused I seem to be the only one suggesting this. (There may be other conservative writers suggesting the same thing … but I did a quick search on my news reader for articles including the words walker and dow and got no results.)

Meanwhile, CNN hits the news bias ball out of the park with the following headline.

Or maybe … Walker’s victory could bring more efforts to strengthen the state’s economy.

These are deliberate decisions being made by news journalists and editors. They needed to look for an explanation for the stock market jump in the United States, and instead of speculating Walker’s win had something to do with it, they speculate Europe’s economy might improve at some point … so therefore the Dow jumped 2.37 percent? Come on now…

Then you have the CNN Walker headline.

Can this be any more obvious?

Not So Much Fun With The Dow – Update: Crash

Governor Malloy are you sure Connecticut is open for business?
Scroll to top