On O’Rielly’s program the other day, Bernard Goldberg reminded us that Accuracy in Media reported – with little fan-fair years ago – that CBS producer Mary Mapes knew President Bush (43) had volunteered to go to Vietnam with his Texas Air Guard unit, a fact Mapes and Dan Rather left completely out of the story in the fall of 2004.

Rather’s blockbuster news story ran less than 60 days prior to the election, and within hours the so-called documented proof was debunked by an army of online bloggers. Within 12 days, CBS News stopped defending the documents as authentic, but heads did not start to roll until January, well after the election. 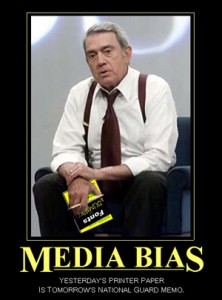 What’s my point? Just forget about the main stream media treating conservatives fairly, it’s not going to happen. Instead of trying to understand why – uhh, most are liberals – I think you should concentrate on honing your discussion and debate skills and try to be a conservative mentor.

Also, be honest and remember there is conservative bias in the media as well. Man, remember the days when you could tell when news was news and commentary was commentary?

As a reminder, blogs – including Radio Vice Online – by definition are commentaries, but no doubt you’ll find breaking news on blogs. My how communications have changed…

Note: Goldberg’s been called out for recycling old news since AIM first reported this in January 2005, but to be fair, either I did not know about this or I knew and I forgot. Goldberg deserves some credit for bringing up this fact again as we continue to discuss media bias.

Did you remember that Mapes – and presumably Rather – knew that Bush (43) had volunteered before the story ran on 60 Minutes 2? Let us know in the comments.

The plot to destroy American capitalism