Just received an e-mail update from Sen. Chris Dodd (D-Conn.). It seems as though our economy is still “feeling the effects of last year’s crisis.” Now, last year was 2008, and this year is 2009. I guess he figures since President Obama took office, the crisis must have ended and it was – of course – all Bush’s fault! 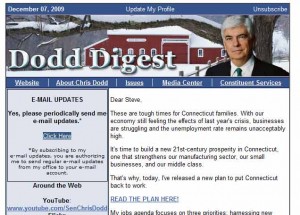 Dodd included the reference to last year’s (2008) crisis in the first paragraph of his e-mail. Now, I’m not exactly certain which crisis he was referring to, but to imply the crisis ended at the beginning of 2009 is a complete stretch. Talk about trying to rewrite history as soon as possible.

First of all, things were definitely a mess in 2008 and I blame politicians on both sides of the aisle for the issues and you know that I’m all about understanding the symptoms of the disease, but come on.

The e-mail begins, with my emphasis added.

These are tough times for Connecticut families. With our economy still feeling the effects of last year’s crisis, businesses are struggling and the unemployment rate remains unacceptably high.

It’s time to build a new 21st-century prosperity in Connecticut, one that strengthens our manufacturing sector, our small businesses, and our middle class.

That’s why, today, I’ve released a new plan to put Connecticut back to work. 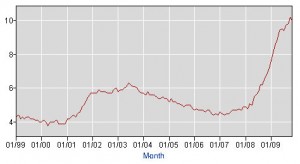 Yup. All Bush’s fault. Dodd had absolutely nothing to do with it.

Just a couple of reminders to the senator. In February of 2008, we were basically at full employment – considered to be 4.7 percent by economists. Things were not looking to good at that time and by mid-summer it was looking worse. We ended 2008 with unemployment at 7.2 percent.

At the start of 2009, Dodd figured the crisis was over, but unemployment continued to rise, with a couple of months of drops to the current 10 percent. 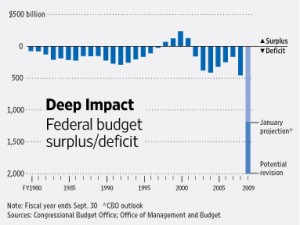 It gets worse. The revised figures provided by the Congressional Budget Office projects a potential revision of up to $2 trillion for the 2009 budget deficit.

As a reminder, the entire 2002 budget – the whole friggin’ thing – submitted by President George W. Bush was $2 trillion.

Does this data confirm what Dodd is trying to sell us? Not thinking so, and I have not even told you how much the total federal revenue stream is down in 2009 – you don’t want to know…

Democrats Protect Dodd, Conrad and The Fat Cats of Countrywide

The Cost of Education
2 replies

Closed door meeting held in Washington on … Freedom of Information Ac...Obamacare: not a CLASS act
Scroll to top