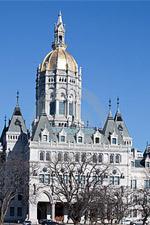 Between August 29 and September 5 a survey was conducted of voters in ten states on behalf of the Manhattan Institute. The results are interesting.  More than 75% of those polled said that their state faced serious budget problems this year, and almost 70% said the problem was resolved by budget cuts, not higher taxes.

The survey involved Florida, Illinois, Indiana, Michigan, Montana, North Carolina, New York, Ohio, Pennsylvania and Wisconsin.  Whether you believe polls or not, the results of this poll are worth reading.

And, when it comes to public employees,

Voters also believe that public employees generally are allowed to retire in their fifties, but should work to 65 like the private sector does.

[c]ollective bargaining is not overwhelmingly popular in the abstract. A majority (50%) agrees that ‘public employees should not bargain collectively and use union power to limit or delay the delivery of important government services.’ Moreover, 60% of voters feel that collective bargaining is a benefit ‘and can be changed and negotiated based on economic circumstances,’ while 30% see it as essential’ and ‘a basic right of labor.’ In the recent ‘disputes between state governments and public unions over collective bargaining,’ voters side with state officials by 46% to 39%.

Although Connecticut was not one of the states surveyed, it would appear that had those surveyed lived in Connecticut, Governor Malloy’s solution to Connecticut’s problems would have gotten a “thumbs down”.

The Solyndra hearings
Scroll to top