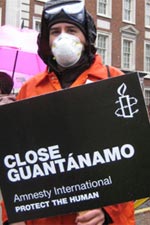 So where is the outrage? Let me make this clear, if President Bush (43) had signed an executive order promising Gitmo would be closed within one year and he missed the deadline by three minutes, there would be calls for impeachment by the left and the media. Yet today, Bush critics are silent concerning President Obama’s broken promise.

As of mid-January, 173 terrorists from around the world remain held in Guantanamo Bay, Cuba. Within the last year, 22 of the detainees were transferred to multiple locations including Algeria (2), Germany, Latvia, Spain (3), Cape Verde, Yemen, Bulgaria, Georgia, Switzerland (2), Albania and Hungary.

Without a doubt, this action – or inaction depending on how you look at it – tells us something about how the president approached his new job in January 2009. He went in like a lion, figuring a swipe of the magical executive order pen would set in motion his personal wish. Yet, reality must have struck hard as more and more aides reminded him of his responsibility to keep America safe.

The folks held in Gitmo were not friendly to the United States or any other non-Islamic western ally. If released, many would choose to go back to fighting the jihad. A Pentagon report from April 2009 indicated 14 percent of the former detainees were confirmed or suspected of going back to terrorist activities.

Of the more than 530 Guantanamo detainees transferred from Department of Defense custody at Guantanamo Bay, 27 were confirmed and 47 were suspected of reengaging in terrorist activity. Between December 2008 and March 2009, nine detainees were added to the confirmed list, six of who were previously on the suspected list.

Since April of 2009, about 68 more detainees were transferred from Gitmo to other countries.

The director of National Intelligence reported in December the intelligence community figured 81 previous detainees (13.5 percent) are confirmed to have gone back to terrorist activities and another 69 (11.5 percent) are suspected of doing so. Assuming detainees were originally sent to Gitmo because of terrorist activities – some think the “vast majority” of them were totally innocent – the recidivism rate does present a problem for the current and future administrations.

Although not a perfect solution, it seems Guantanamo Bay is the best option we have for enemy combatants who have been captured and detained.  I certainly do not have an answer to the current situation, but I know Obama announcing the closure of Gitmo was totally premature, irresponsible and politically motivated.

The Defense Authorization Bill signed by President Obama earlier this month has a provision that makes it almost impossible for the administration to move detainees to the United States for detention or trial. Obama has promised to seek repeal of those restrictions, but in effect, the new law keeps Guantanamo Bay’s detention facility for terrorists open for the foreseeable future.

Update: Interesting timing. Former Vice President Dick Cheney mentioned President Obama probably figured out many of the Bush policies on fighting terrorism were right. From The Hill, with a hat tip to Gateway Pundit.

In his first interview since undergoing major heart surgery last July, Cheney said he thinks Obama has been forced to rethink some of his national security positions now that he sits in the Oval Office.

Cheney also asserted that Obama has learned that the prison at Guantanamo Bay simply cannot be closed, despite the promises he made while campaigning for the White House.

“I think he’s learned that he’s not going to be able to close Guantanamo,” Cheney said. “That it’s — if you didn’t have it, you’d have to create one like that. You’ve got to have some place to put terrorists who are combatants who are bound and determined to try to kill Americans.”

Obama: Not the smartest man in the room?

Matthews to Michael Steele: Were you afraid Republican white guys were scared...