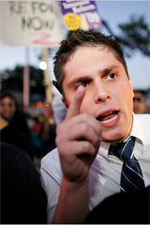 Congressional Democrats are being urged by leadership to avoid town hall meetings and other public events that offer the ability for voters to ask questions in uncontrolled settings. Last summer’s finger waving and YouTube video accounts seems just too much to handle for faltering Democrats.

Sorry I have not had too much time to write lately, but I will try to get back into things. Anyway…

This story from the New York Times caught my eye the other day. Since last summer did not go so well, Congressional leadership is strongly suggesting incumbents running for re-election this November keep a low profile. I guess you could call it another symptom of the disease, the all-powerful can now simply place a barricade between themselves and voters.

If the time-honored tradition of the political meeting is not quite dead, it seems to be teetering closer to extinction. Of the 255 Democrats who make up the majority in the House, only a handful held town-hall-style forums as legislators spent last week at home in their districts.

It was no scheduling accident.

With images of overheated, finger-waving crowds still seared into their minds from the discontent of last August, many Democrats heeded the advice of party leaders and tried to avoid unscripted question-and-answer sessions. The recommendations were clear: hold events in controlled settings — a bank or credit union, for example — or tour local businesses or participate in community service projects.

And to reach thousands of constituents at a time, without the worry of being snared in an angry confrontation with voters, more lawmakers are also taking part in a fast-growing trend: the telephone town meeting, where chances are remote that a testy exchange will wind up on YouTube.

These are the people who have been elected to serve as our representatives inside the beltway, and they are refusing to meet with us because they don’t like the bad press. Why are they afraid? Sure, TEA Party members can be boisterous and seem bit angry on occasion, but so what? Man up and deal with it. You’re not a leader if you can’t calm people down and have a discussion with them.

You best be able to explain your position in a way that makes sense to your constituents. You’re elected to represent everyone in your district, not just those who blindly vote for you. You must lead, teach and mentor. Is that too much to ask?

The big problem is Congress’ continued path towards a soft tyranny, and people don’t like it so much. As the federal government continues to steal property from future generations to fund federal busy-work projects, people notice. I’ve said Feb. 2009 was a tipping point for many voters … an awakening if you will … and hiding with friends won’t help you much come election day.

Obamacare: the arrogance of the elite

Peckinpaugh in … running for Congress

Rollins to Specter: Game On

Getting all the way in to the stimulus package
22 replies